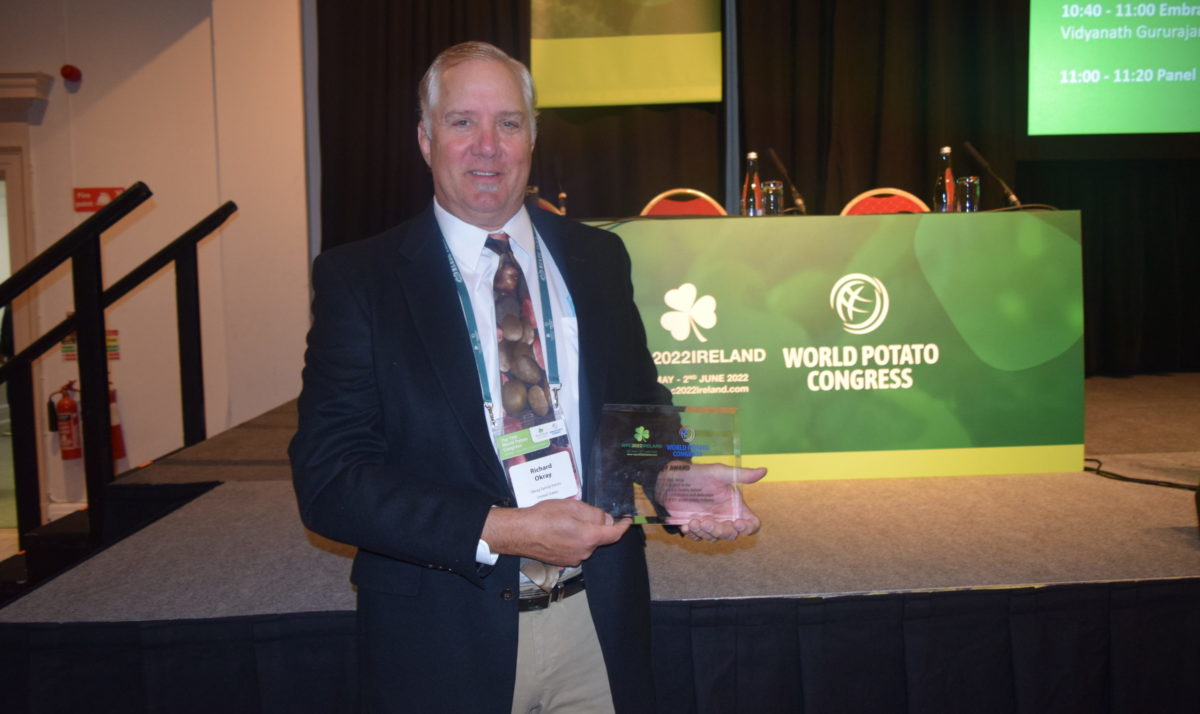 Okray was born in Stevens Point. The son of Joseph and Patricia Okray, he attended school in Stevens Point and graduated in 1977 from Pacelli High School. In 1981, he taught English in Cali, Colombia and in 1982 he graduated from the UW-Stevens Point with degrees in economics and Spanish.

He was employed from 1982-2020 at Okray Family Farms in Plover, growing 7,750 acres of quality row crops in Central Wisconsin, specializing in fresh channel potatoes. The farm was started by his family over 110 years ago. His most recent position title was president and sales. Following his retirement in 2020, he remains a co-owner of the family farm, which won a national environmental stewardship award for its outstanding achievement in the area of pesticide risk reduction.

The international potato industry has benefited greatly from the leadership of Okray. He served on the U.S. Potato Board (now known as Potatoes USA) and has served as a potato industry ambassador from the United States, attending multiple World Potato Congress events in China, Scotland, New Zealand and Peru.

He and his wife, Carol, were instrumental in helping raise funds to build multiple wells in impoverished villages near Cameroon, Africa. They established a WellersWalk event in Stevens Point with participants filling and carrying large water jugs to a central location, raising awareness of the trek many villagers in Africa make daily just to gather enough water for their family’s needs. Funds raised from the annual event were used to construct wells in areas around rural Cameroon, greatly improving the lives of thousands of villagers.

Active in his community and his industry, Dick has served on numerous organizations and boards including: Wisconsin Migrant Labor Council; Central Wisconsin Economic Development Corp.; United Potato Growers of Wisconsin and the United Potato Growers of America. Dick is also widely respected and admired for his philanthropic efforts, serving on the Board of Directors of the St. Michael’s Hospital Foundation, the Edward J. Okray charitable Foundation and recently the Farming for the Future Foundation.

Dick served two terms, including one as chairman of the International Committee for the U.S. Potato Board. He also served on the Wisconsin Potato Industry Board from 2015-2020, and held the position of vice president.

He received the WPVGA Agri-Communicator Award; the Portage County Business Council’s Outstanding Contribution to Agriculture Award; and the prestigious UW-Stevens Point Distinguished Alumni Award. In 2019, he was inducted into the Wisconsin Potato & Vegetable Growers Association Hall of Fame.

Dick has been married to Carol, for 38 years. They have three adult children: Xerxes, Hannah and Max. A marvelous entertainer, Dick enjoys performing music and magic. In addition to golf and travel, he lists his hobbies as reading, learning and growing.

Other awardees include Dr. John J. Burke, one of Ireland’s foremost experts in the area of potato agronomy; Paul C. Struik, a professor of crop physiology at Wageningen University; Antoon Wallays, a Belgian potato processing entrepreneur.