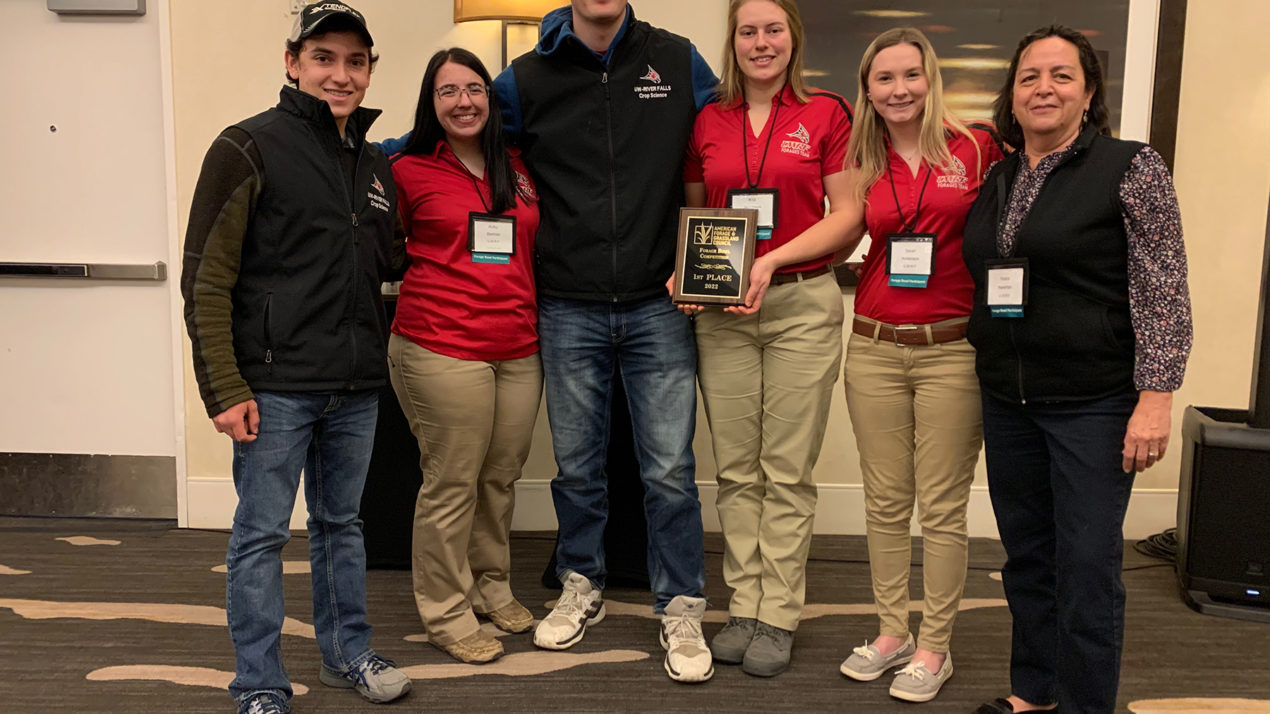 For the third year in a row, the team from the University of Wisconsin-River Falls captured first place at the National Forage Bowl competition. The competition took place at the annual meeting of the American Forage and Grassland Council (AFGC) which was held January 9-11 in Wichita, Kansas, this year.

The competition format is similar to Jeopardy and covers all aspects of forage production and management incorporating questions on forage quality, history, grazing management, hay and silage, plant morphology, poisons and toxicities, and soils and fertility. Individual team members first participate in a live forage plant identification challenge, with their individual scores averaged for each team to set up the playoff brackets. UWRF was ranked second in the plant identification and faced off against Kansas State University in the first round. The championship round, with UWRF taking on Purdue University, took place at breakfast on the final day of the conference in front of hundreds of conference attendees.

The team felt well prepared but challenged to bring home the win again. The 2021 AFGC was online only with no bowl competition.

“We had to work twice as hard to recover and started preparing for 2022 by having two in-person practices a week where Dr. Newman would quiz us on all the different possible categories,” says Anderson.

When it comes to the team performance in the competition, Oswald probably said it best: “…man oh man were we ready. We knew the answers, and we went for them.”

The dominating repeat win “shows that UWRF and smaller universities can match up with larger schools and provide just as great of an education,” says Beehler.

Beyond the bowl competition, the students remarked that the AFGC offered a great opportunity to network with industry professionals and students from across the country.

“I will never forget sitting with the students from Auburn and discussing dialects and cultural differences between our regions of the country,” says Anderson.

As is customary when teams travel to competitions, they check out local cultural and historical sites. The group visited the historic Delano district along the Arkansas River in Wichita and took a photo by the chrome Longhorn steer sculpture. The sculpture commemorates Delano’s place at the end of the Chisholm Trail, where cowboys would rest and recreate after long months driving cattle up from Texas.

“I am confident any member of our team can take material learned in the classroom and implement that material in our careers and our futures in innovative ways,” says Oswald. “This is a team of driven learners who will continue to seek after success in our careers and communities, serving not only ourselves but also others as we navigate the beginning of our careers.”