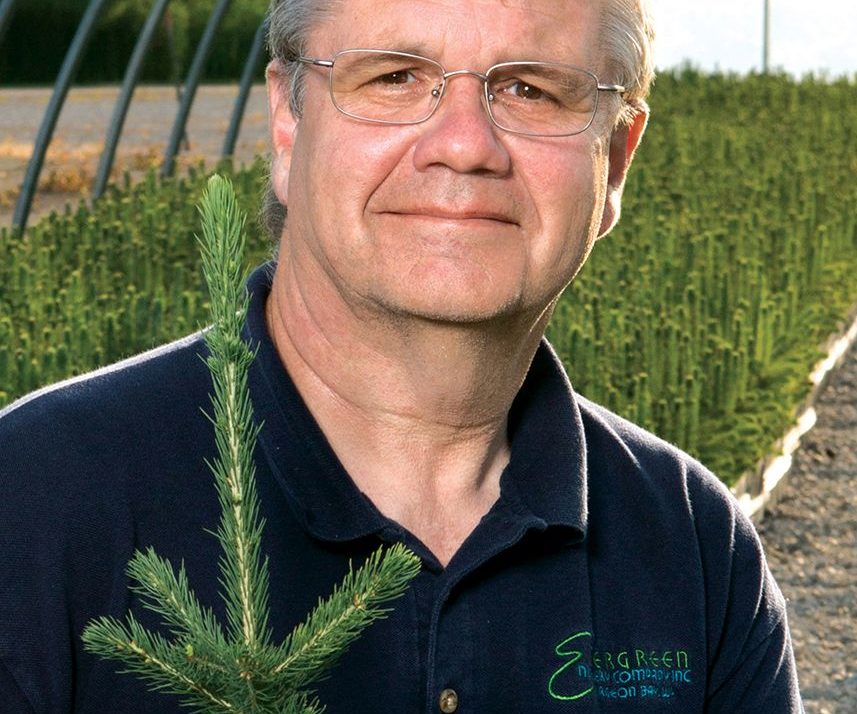 Ron Amos, owner and president of Evergreen Nursery Company, Inc. in Sturgeon Bay, has been named the 2021 Wisconsin Distinguished Agriculturalist by the College of Agriculture, Food and Environmental Sciences (CAFES) at the University of Wisconsin-River Falls.

Amos has taken one of the oldest businesses in Wisconsin and has kept it relevant, innovative and thriving. Evergreen Nursery, established in 1864 by George Pinney, remained in the Pinney family until 2001, when Amos, who had advanced from propagator to vice-president at Evergreen Nursery, purchased the business. Today, Amos oversees more than 30 employees who annually produce three million liners of evergreens, shrubs and birch, and up to two million liners of cranberries that are shipped across the U.S. and Canada. Evergreen Nursery is the largest wholesale nursery in the state.

Amos, a native of Madison, has a strong background in plant propagation having earned a master’s degree from UW-Madison under Brent McCown, Ph.D. Amos started a tissue culture lab at Evergreen Nursery where he optimized the techniques to propagate unique birches and other woody plants which are notoriously difficult to work with, making them commercially viable. He partners with other woody plant breeders to make new and valuable varieties of northern hardy shrubs available.

Amos also works closely with the cranberry industry. The cranberry plant is native to Wisconsin and more than 60% of the cranberries produced in the U.S. come from Wisconsin. With his strong plant propagation skills and deep understanding of plant development, he has helped cranberry breeders increase their number of plants of advanced selections for trials and mass produce the most promising cultivars. His efforts have helped make new, high-yielding cultivars available to growers.

A leader in the International Plant Propagators Society (IPPS), Amos has made significant contributions to their educational programming, has served on numerous committees and served as president in 2014. In 2019, he was honored with the Award of Merit from the IPPS Eastern Region, the highest honor that can be awarded to a member.

His innovations extend beyond plant propagation and breeding. Amos designed unique containers that foster better root systems in young evergreens.  He adapted a technique used by perennial growers and began freezing bare root evergreen plugs which has allowed them to ship plants, at the right stage of development, to customers any time of year.

Amos is also an environmentalist, working to preserve the mycorrhizal fungi naturally present in the soil and which promote strong multi-branched root systems. He also served in a leadership role to help Wisconsin develop ecological sound policies to combat invasive plants coming in through horticulture.

Amos’ contributions in the area of plant production have helped support multiple sectors of Wisconsin’s $2.7 billion horticultural green industry, from landscape and garden center sales, to fruit production. In 2017, he was inducted into the Wisconsin Green Industry Federation Hall of Fame.

“For more than 50 years, the College of Agriculture, Food and Environmental Sciences has been recognizing individuals who have made significant contributions to agriculture and natural resource management in Wisconsin and beyond, as well as supported UWRF and its programs,” said CAFES Dean Dale Gallenberg. “Ron’s place among these individuals is well deserved and we’re pleased to add him to the group. We appreciate his support of our college and what he has done for the nursery industry.”