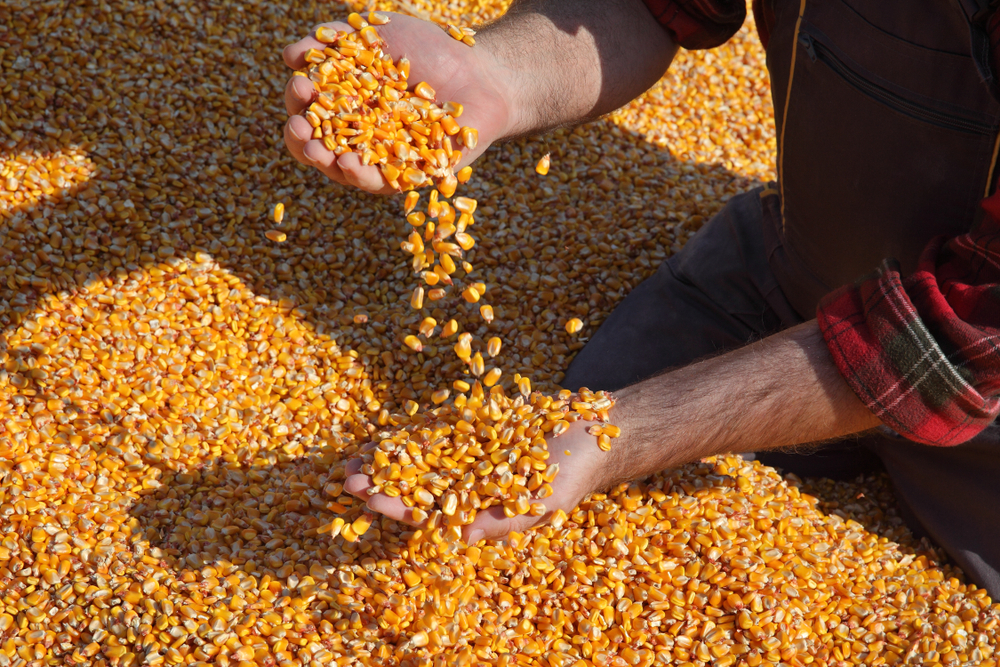 Forty one percent of corn and 61 percent of soybeans have been harvested for grain nationally. Wisconsin crop progress is ahead of the five year average. Corn for silage is 96 percent chopped, four weeks ahead of last year and three weeks ahead of the average. Corn harvested for grain in the state is 15 percent complete, up from 8 percent the previous week. Corn harvest in Wisconsin is running 18 days ahead of last year and three days ahead of the five year average. Moisture content is averaging 23 percent. Soybean harvest in Wisconsin is 46 percent complete, 16 days ahead of last year and a week ahead of the average. Strong export demand for US raised soybeans and dry weather in Brazil’s crop growing regions have buoyed bean prices. China’s talk of preparing for war was pressuring US financial and commodity markets Thursday, however. China has bought about one-third of their Phase I trade commitment with the US for the year so far. Corn futures at or near $4.00/bushel have added additional pressure to Feeder Cattle contracts. Feeder cattle prices at auction markets have varied widely. Fed Cattle futures, and cash cattle were lower this week.

Buyers and sellers have struggled to agree in the cattle market this week. Sellers came into the week expecting prices steady to $2.00 higher, while buyers expected to buy cattle steady to $1.00 lower than last week. Wholesale beef prices were lower this week, and while beef demand has been good domestically, there’s evidence shoppers are being attracted to pork and chicken given those proteins’ price relative to beef. We can generally expect beef prices to increase leading into the Holiday Season, especially given supplies of market-ready cattle are decreasing now, but 2020 hasn’t been a typical year.

Wholesale pork prices are 27 percent higher than this time last year, and cash hog prices are going up. The market is shrugging off expectations of a large supply of hogs available. From a price standpoint, pork is still an economical choice for the consumer when compared to beef. Exports have been strong given the attractiveness of US pork prices, African Swine Fever in parts of the world, and countries needing to control food prices during COVID-19 driven economic slowdowns.

Lamb prices are strong with little signs of slowing down. Lamb isn’t a protein consumed at home by the average family. From a foodservice standpoint, most lamb would be utilized by high-end restaurants – the type of restaurants that are struggling the most this year. Ethnic markets are changing lamb demand and driving prices. Lambs weighing no more than 85 pounds are most desirable for existing ethnic markets. This has meant there are fewer feeder lambs available and fewer lambs being fed to the conventional 110 to 130 pounds. In short, there isn’t as much traditional restaurant type lamb available and that has driven up prices.

A story in Meat + Poultry says consumers are reporting paying more for meat and poultry in the past six months. The information is based on a survey done by C+R Research, a Chicago-based marketing research company. Eight-five percent surveyed said that meat, eggs and milk are the top three items they’re paying more for. In a separate report cited in the article, The Bureau of Economic Analysis recently released data showing price increases of 10.3% for beef, 6.3% for poultry and 5% for pork, backing the consumers’ claims. While 65 percent said they have cut back on food spending, 88 percent are concerned grocery prices will continue to increase, and 85 percent are worried that shortages will continue.