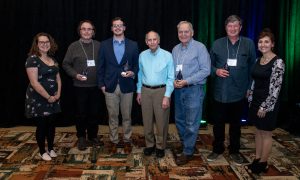 Four individuals and two citizen monitoring groups from across the state were recognized last week for their contributions to volunteer stream monitoring and sharing their knowledge about the health of Wisconsin’s streams.Winning in the “Employee” award category, was Bob Sampson, of Grande Cheese in Juda, Wisconsin. Bob is involved in stream monitoring through his role at Grande and as a board member and volunteer with the Lower Sugar River Watershed Association. Bob has monitored four sites for five years in the Juda Branch, and has also supported other teams of monitors, helping them identify sites to monitor and assisting in entering their data into the statewide database. Bob is also quick to share his knowledge with others as he gives student tours and presentations at events and meetings.Green Lake Watershed WAV (Water Action Volunteers) received the “Rookie” award for “making positive contributions to stream monitoring in their first season.” Prior to 2018, Eric Godfrey (rural Ripon) and Tom Wagner (rural Green Lake) had both been collecting data on two tributary streams to Big Green Lake as part of a larger Central Wisconsin Trout Unlimited water monitoring group, but it was when they started developing the idea of monitoring the streams flowing into Big Green Lake in a more comprehensive manner that momentum began to build and Green Lake Watershed WAV took shape. Their goal was realized in 2018 with 19 volunteers collecting data at 14 monitoring stations covering all the tributary streams flowing into Big Green Lake!The presence of a Water Action Volunteers (WAV) program on a college campus can motivate and involve students of all majors, giving insight into potential career opportunities for those students. The UW-Whitewater Sustainability Office Student Volunteers make for a perfect example, and for their efforts, they were chosen to receive the 2019 “Group” award. With three stream monitoring sites close to campus, Wesley Enterline, Sustainability Office Coordinator, provided countless opportunities for students to be involved. In 2018, after being trained themselves, students Max Gruenberg and John Roberts led three volunteer sessions a month from April through October, bringing 30 new student stream monitors on board. In addition, the group engages with the Whitewater community through field trips and summer camps for Whitewater Middle school students.The outstanding “Citizen Volunteers” award goes to Bob and Linda Merline of Fish Creek, Wisconsin, who have been instrumental in their local stream monitoring efforts for more than 18 years! Linda, as the team leader for the Fish Creek Watershed monitors, organizes site visits, regularly trains and communicates with volunteers, and meticulously prepares the data sheets while Bob focuses on maintaining, calibrating, and testing the equipment that will be provided to the volunteers. Their collective efforts include seeking grant funds and support for studies and projects in the watershed, bringing attention to the water quality of the creek and health of the watershed through public reports, and working on a project in conjunction with Chicago’s Shedd Aquarium.The Volunteer Stream Monitoring “Pioneer” award has been given just three times since the inception of the awards program in 2002. It is truly reserved for those who have made deep and lasting contributions to volunteer monitoring and stream stewardship. This year, the award was given (posthumously) to Ron Martin.Ron learned to care for the environment from his parents. These lessons guided him in both his personal and his professional life and he passed those lessons down to sons Andy and Dan. They say that the best way to honor their dad’s memory is to “enjoy this wonderful world responsibly and sustainably.”Ron’s distinguished career with the Wisconsin DNR and the Dane County Office of Lakes and Watersheds, as well as his efforts as a volunteer through the Friends of the Scenic Lodi Valley show his passion for his chosen field of work. His monitoring efforts were limitless, including monitoring that supported the Wisconsin River TMDL and the Spring Creek Watershed Survey, calibrating and collecting data using meters, and collecting macroinvertebrate and water chemistry samples. Former DNR colleague Dave Marshall spoke for everyone when he said “Ron demonstrated his lifelong passion for conservation in many ways over the years and he is sorely missed. His contributions as both a Water Resources Management professional and volunteer will not be forgotten.”The University of Wisconsin-Madison Division of Extension and the Wisconsin Department of Natural Resources present the Volunteer Stream Monitoring Awards annually to recognize citizens, employees and organizations for their commitment to monitoring, collecting data, raising awareness and sharing knowledge about Wisconsin streams. This year’s awards were presented at the Wisconsin Lakes Partnership Convention and Water Action Volunteers Symposium in Stevens Point on April 11.“Every year I am inspired by the incredible amount of energy and effort these award winners put forth to monitor, share their knowledge with others, and work to effect positive change in their communities,” says Peggy Compton, Extension’s Water Action Volunteers Coordinator for Baseline Monitoring and Outreach.Wisconsin has more than 42,000 miles of year-round streams and rivers, and volunteers annually monitor over 700 sites on those streams, according to Compton.To learn more about the Water Action Volunteers Stream Monitoring program, visit: http://watermonitoring.uwex.edu/wav/.