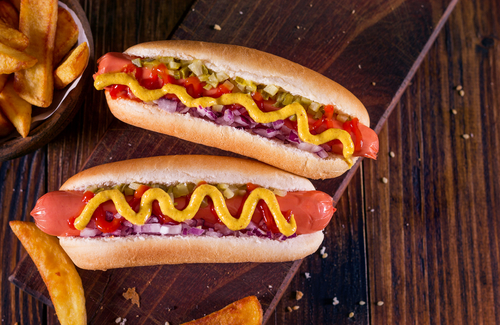 Today is National Hot Dog Day, and you know what that means restaurants from coast to coast will be offering free or at least discounted dogs for everyone to enjoy.

The origins of America’s favorite sausage is actually unclear as some “sausage aficionados” claim the processed delights go all the way back to Roman times even mentioned in Homer’s Odyssey while Germany celebrated the 500th birthday of the Frankfurter in 1987.

According to the National Hotdog and Sausage Council the name Hotdog is still controversial and its origins date back some time too. It’s said that the “frankfurter” was first  developed  in Frankfurt Germany t in 1487,  that’s actually five years before Christopher Columbus ever set sail and found America. Meanwhile the people of Vienna (Wien), Austria, claim that the name “wiener” is proof enough that the origins of the beloved sausage that bares there namesake is proof enough of its origins.

Today’s research points in another direction, it is most likely that the North American hot dog comes from  widespread common European sausage brought here by butchers of several nationalities.

More is actually known about the way we eat the sausages today, on a bun. It is believed that today’s hot dog on a bun was introduced during the St. Louis “Louisiana Purchase Exposition”  all the way back in 1904. The story goes that a Bavarian concessionaire, Anton Feuchtwanger.

The legend has grown throughout time but as the story goes, Feuchtwanger loaned white gloves to his customers to hold his piping hot sausages. So many of the gloves were not returned that naturally the supply began running low and looked for alternatives. He reportedly asked his brother-in-law, a baker, for help. The baker improvised long soft rolls that fit the meat – thus inventing the hot dog bun. So you can thank a baker for today’s traditional hotdog.