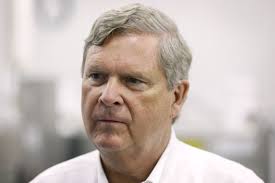 Former US Ag Secretary, Tom Vilsack, took time to visit with Farm Director, Pam Jahnke on Friday to discuss the current situation with Canada’s dairy industry – and Wisconsin processors that depend on it.  Vilsack is now the President and CEO of the US Dairy Export Council.

Vilsack says there’s no quick fix for what Canada’s doing to keep Wisconsin milk out of their market – but keeping pressure on elected officials could help.  Vilsack just returned from a trade mission to Mexico, working on keeping lines of communication open to the U.S.’s number one dairy market.  He says the situation between the U.S. and Canada has been difficult for the past number of years, but really peaked when Canada implemented their “Class 7” category in dairy processing.  This new category makes it “very unlikely that Canadian processors will need or use U.S. product”, according to Vilsack.  He says he’s asked for written clarification of what this “Class 7” is going to work so USDEC could make an independent determination that it complies with international rules and regulations.  He says to date he has received no concrete answer from Canadian officials.  “That raises the concern and the suspicion that indeed this is a system designed in part to make it more difficult for us to import into that market.  That’s not the way trade agreements are supposed to work.”