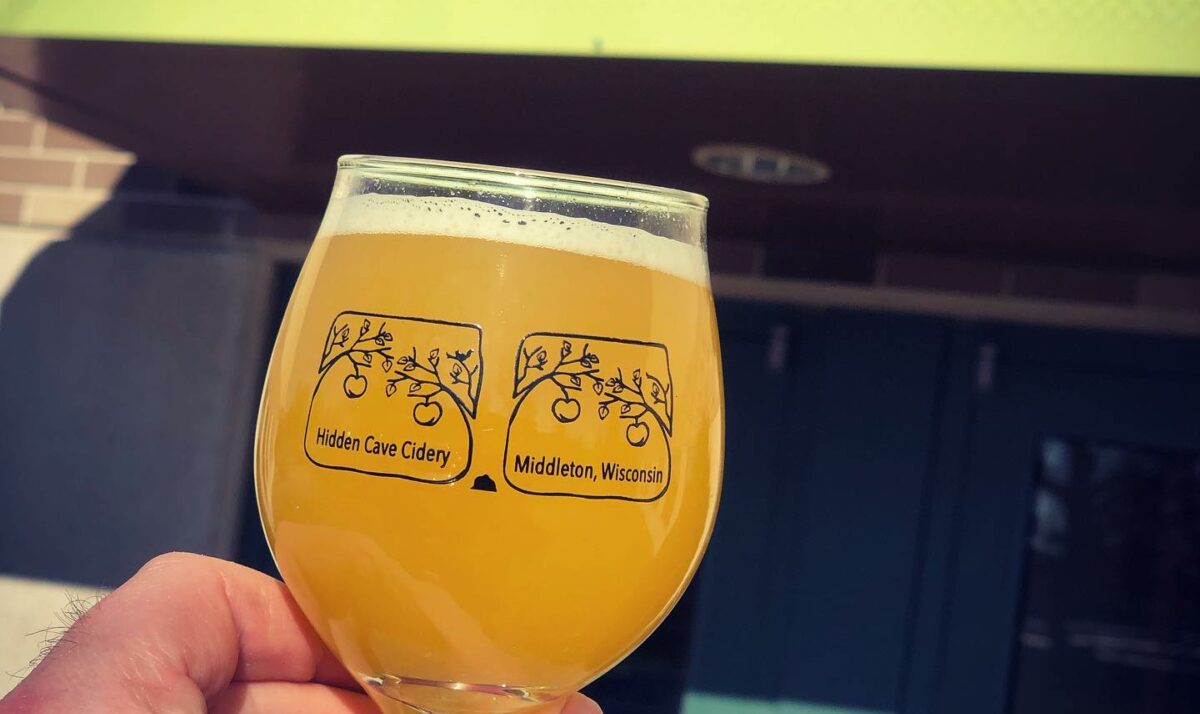 With an agronomy degree from UW–Madison and a passion for a career in plant seeding, Walker Fanning wanted to work on a fruit-crop farm, but his choices were limited and seasonal. Fanning went from uncertainty to now owning and running Hidden Cave Cidery.

He shares more on his journey to becoming a craft cidery owner that promotes Wisconsin’s apple farmers.

Fanning went to college for an agronomy degree however wanted to focus on fruit crops rather than grain crops. After graduation he started out working for a small apple orchard in south Madison. He saw the plethora of cider the business had on shelves and asked them why they weren’t selling it.

“At the time, I was living on the east side of Madison, and they were on the south side,” said Fanning. “I know there are so many farm to table places that want a product that’s made from Wisconsin apples that’s coming straight from a farm.”

Fanning began marketing the cider and in eight months they went from two liquor store locations to over thirty different bars and restaurants. He then moved on and began working at Old Sugar Distillery.

At the distillery he began making cider using Wisconsin apples and sold out of the five gallons he made in the same day they posted about it online. He began making other flavors, called a distributor and began the Hidden Cave Cidery.

“Now we have over 22 different hard cider flavors that we make,” adds Fanning. “With the pandemic happening, when all the bars and restaurants closed down, we didn’t have a market anymore because we were just selling to bars and restaurants, and it was draft only. However, I already had labels designed.”

Fanning had his labels printed, bought a palette of bottles, and began bottling the ciders that were already kegged. This allowed him to pivot his marketing and be in all liquor stores. However, with the pandemic sales decreased and he needed to get another job.

Fanning began working at Eplegaarden in Fitchburg while also bottling the cider he was making. After about a year of doing double duty, he found a space for a tasting room in Middleton. He made a deal with the distillery that he would do all the work and come up with flavors if they would pay for it all.

After signing the lease, Fanning bought out his business from the distillery and moved it completely into the Middleton location. Now, Old Sugar Distillery and Hidden Cave Cidery are two separate companies.

Fanning adds, “In that time, we’ve become the highest rated hard cider company in Wisconsin. We’re actually, last time I checked, number 37 in the world and we do that all with Wisconsin apples, which is pretty cool.”

“The point of buying Wisconsin apples is to support the farmers in Wisconsin who have chosen to grow apples and to show them if you overproduce for your operation, there are people in this state who only want to use your apples,” adds Fanning.

Fanning hosts events at Hidden Cave Cidery to bring people together to not only try his cider but learn more about the Wisconsin apple industry. He hosts live music on Saturday nights, cheese board pairing classes, yoga, and much more.

He has fun new flavors coming up for the holidays including a cider called Sweet Potato Casserole. You can learn more about Hidden Cave Cidery and plan your visit be going to his website.