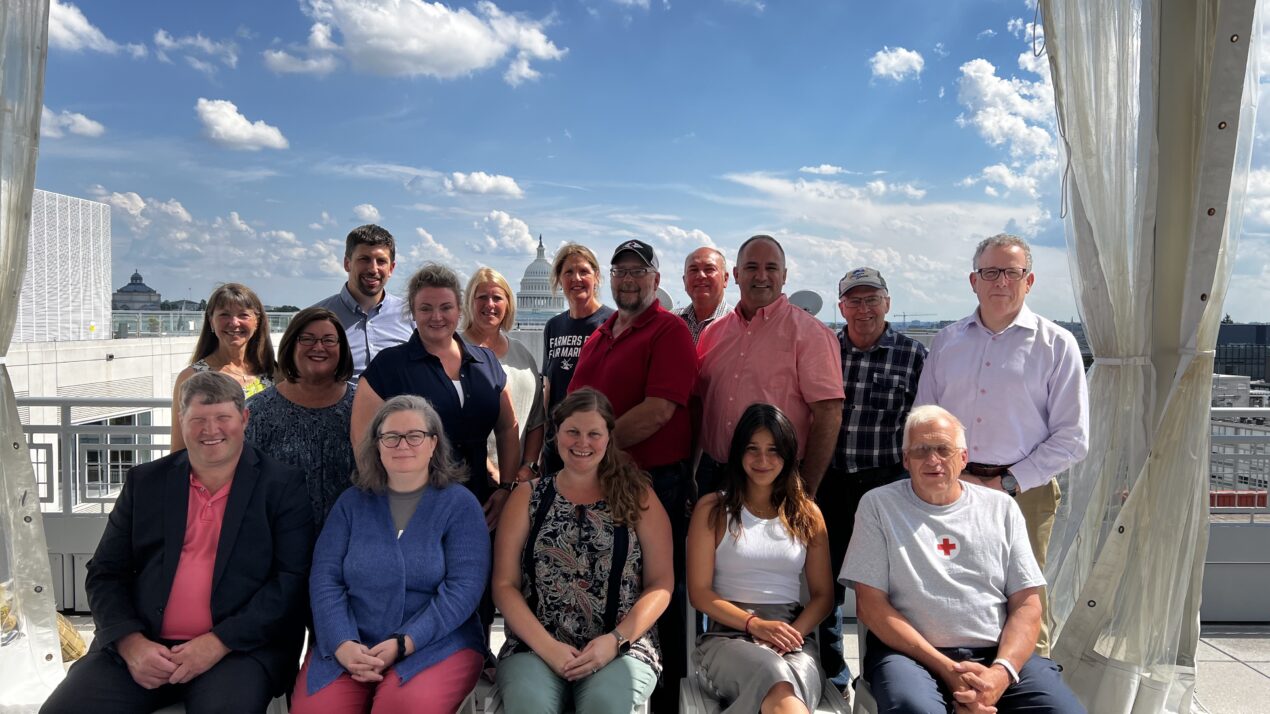 A coalition of farmers nationwide took time away from the farm for the Dairy Together Fly-In to Washington, D.C. Representing key dairy states and farm groups under the umbrella of Dairy Together, the participants advocated for meaningful dairy policy in the next Farm Bill and shared the Dairy Revitalization Plan with their state delegations and members of the House and Senate Agriculture Committees.

The farmer-led plan was developed through a committee process involving members of the Wisconsin Farmers Union and Wisconsin Farm Bureau Federation, convened by the University of Wisconsin Center for Integrated Agricultural Systems. Its impacts were analyzed in a 2021 study, “Analyses of Proposed Alternative Growth Management Programs for the US Dairy Industry,” by UW agricultural economists Charles Nicholson and Mark Stephenson.

Support for the plan has been building and the farmers stressed the need for change in their visits to Capitol Hill. Over the last decade, the USDA recorded the loss of 17,000 dairy farms.

“Something has to change, because we can’t continue down the road we are on, with ongoing farm loss and consolidation of our food supply,” says Westby dairy farmer Darin Von Ruden.

“As farmers, we need to realize that there are so few of us, we can’t take the risk of being divided,” says Jack Herricks, who runs a 600-cow dairy with his family and is president of the Monroe County Farm Bureau. He advocated shoulder-to-shoulder with Farmers Union members, in a show of unity. “My grandson asked me recently ‘Grandpa, do you think the farm is still gonna be in business when I want to
farm?’ We’re survivors, but, honestly, I don’t know how much more farmers can take.”

The group noted that the research shows that, had growth management been implemented in the 2014 Farm Bill, it would have increased the market milk price by an average of $1.41/cwt between 2014 and 2021 plus paid dividends of $0.72/cwt for farmers choosing not to expand over program allowable amounts. The plan also reduced the degree of variation in prices by 50 percent. It also could have reduced government expenditures on the Dairy Margin Coverage program by $2.6 billion in that time span, while improving net income on farms of all farm sizes that stayed within allowable growth.

For Herricks, a price swing of even $1/cwt of milk can mean a shift of $120,000 in annual farm income. “In 2020, we saw fluctuations of $9.20/cwt,” he said. “How do you plan your business around those kinds of shifts? We need a plan where we can have some stability in pricing.”

Cambridge dairy farmers Tina and Duane Hinchley highlighted the need to stabilize dairy prices so there is a future for the next generation. They recently invested in robotic milkers on the farm and are transitioning the operation to include their daughter, Anna, but it has been a struggle amidst volatile markets and unpredictable prices.

“Everybody else is asking for a minimum living wage. It’s time farmers ask for one,” Tina said.

WFU Communications Director Danielle Endvick highlighted the urgency behind the movement, noting that over 7,500 dairy farms have gone out of business since the 2018 Farm Bill was adopted.

“Few of us out in farm country have been untouched by this crisis,” Endvick said. “Many of us have
watched friends and family sell out, and we’ve seen the ripple effects in our communities. We need
smart dairy policy in this Farm Bill; we can’t wait another four years.”

“What is exciting about Dairy Together is the variety of groups in the room,” National Farmers Union President Rob Larew said. “I’ve been in the milking parlor, in back rooms drafting farm bills, and now in this role with Farmers Union working on the advocacy side, and I can tell you, that unity is key.”

Larew also stressed the importance of farmers stepping up. “Your stories matter,” he said. “It is irreplaceable when farmers take the time and commit to telling their stories up on Capitol Hill.”

“Dairy Together farmers had some fruitful conversations and built relationships with a number of
lawmakers who will be writing the next Farm Bill,” said Dairy Together Organizer Bobbi Wilson. “This
plan has the potential to improve profitability across the board, for farms of all sizes, and these
conversations are helping to move the dairy industry in a positive direction.”

Farmers can run growth management scenarios for their farm at https://dairymarkets.org/GMP/.