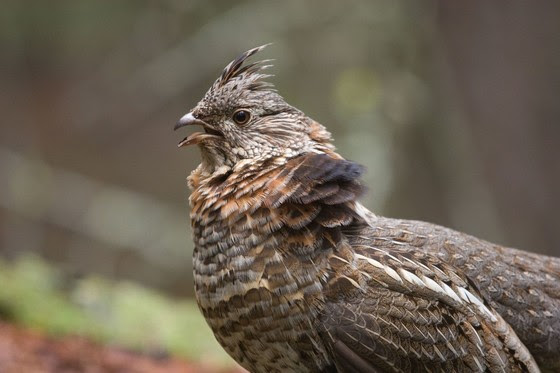 “These results are not surprising. Ruffed grouse typically follow a 10-year population cycle,” says Brian Dhuey, DNR wildlife surveys specialist. “While we don’t have data for 2020 due to COVID-19 restrictions, we know that cycles usually peak in years ending in 9, 0 or 1. We’re likely going to see that abundance begin to wane in the coming years as we enter the ‘down phase’ of the cycle.”

Drumming is a practice performed by male ruffed grouse, typically during mating season. During the ritual, males first beat their wings slowly and then more rapidly to create a deep, thumping sound. The display usually lasts 5-10 seconds, during which the wings can beat approximately 50 times. Surveyors listen to this sound to identify and count male ruffed grouse each spring during the mating season.

The department also reported a slight increase in pheasant observations compared to 2021 in its annual spring ring-necked pheasant survey. However, the count remained below the most recent five-year average. DNR wildlife managers use a measurement known as an abundance index to assess the state’s wild pheasant population each year. This assessment is a roadside count of crowing males that accounts for the number of breeding males in the area and indicates the abundance of pheasants going into the breeding and nesting season. The abundance index was the highest in the northwestern part of the state, but all three areas had an increase in their abundance index in 2022.

Survey results point to a promising season this fall for Wisconsin waterfowl hunters. Surveyors estimate the state’s breeding duck population at 591,762 birds, a 6% increase over the 2021 estimate and 34% over the long-term average.

Canada goose numbers are up as well compared to 2021, consistent with the stable to increasing population seen over the past 10-15 years.

Find these and other wildlife survey reports on the DNR’s wildlife reports webpage.