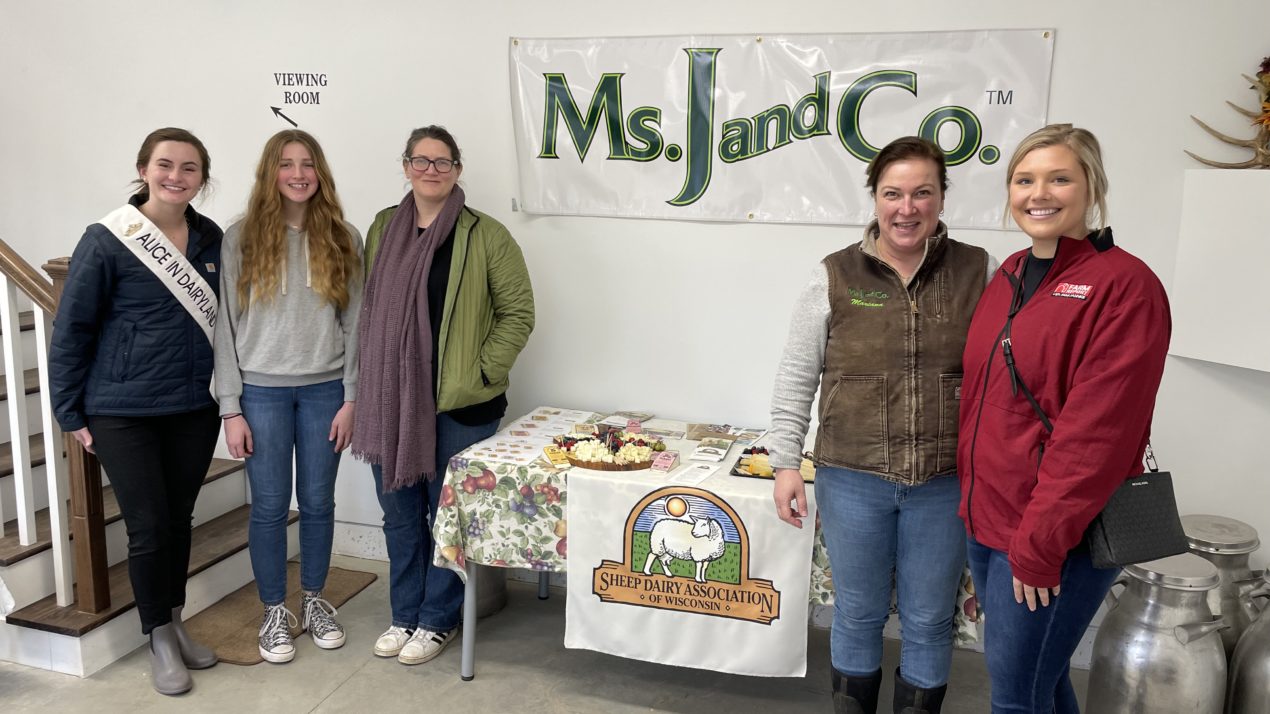 Wisconsin may be known as the nation’s dairy powerhouse, but there are more than just bovine contributing to the state’s dairy industry. The state is in fact home to the most sheep dairies in the nation, and the most dairy plants turning sheep milk into cheese.

Ms. J and Company, a SDAW member, is one of the largest sheep dairies in the country, milking just under 200 sheep this time of year. Partners Jeff Wideman, Shirley Knox and Mariana Marques de Almeida officially sparked the idea for Ms. J and Company in 2014.

Mariana, a native of Portugal, visited Wisconsin to judge the World Championship Cheese Contest in 2012. She grew up surrounded by sheep milk products like cheeses, yogurts, and more – in Spain, for example, she says over 5 million ewes are milked each year. According to the USDA 2021 Agricultural Statistics, Wisconsin is home to just under 1.3 million milk cows.

Her initial visit was fueled by an idea to import cheese made in Spain and Italy to the US, but evolved into a building project where they set out to domestically produce sheep milk cheeses. When they first began this project, however, it was challenging to find enough milk to sustain in cheese making. Mariana says there weren’t enough dairy sheep in Wisconsin at the time.

It took their group two years of negotiations with the USDA, European Union officials, and the Spanish Department of Agriculture to have the ability to import semen from the Spanish breed of dairy sheep that Mariana knew well – Assaf – and start their own flock.

Following negotiations, they planted their roots in Juda, WI and are now focussed on developing top quality genetics, serving as a source for sheep dairy farmers to obtain genetic materials from established dairy European breeds.

Ms. J and Company has continued to grow their Assaf flock, which Mariana says is the only of its kind in the United States.

Assaf sheep originated in Israel at the Volcani Research Center in the 1950’s by combining the Awassi and East Fresian breeds. After the Assaf Spanish Breeders Association created a genetic improvement program in Spain, their quality and quantity of milk increased, making them the highest producing sheep breed in the world.

Mariana says Assaf are still known for their high milk production and floppy ears. Because of their facility’s controlled conditions, they are also able to lamb year round.

Their higher producing ewes on the farm can produce more than 2,000lbs of milk per lactation, and their milk is primarily used for manufacturing. Mariana says they are beginning to venture into products like yogurt on top of their cheese specialization.

What makes sheep’s milk unique is its ability to be frozen because of its distinct protein type, Mariana says. It can be frozen, thawed and still consumed as a fluid product, unlike that of their bovine counterparts.

Ms. J and Company is therefore able to freeze and ship their product to California and Washington, and provide products to customers who are lactose intolerant or dairy sensitive.

Technology has made an impact on their business since the start, where microchips in each of their ewes not only provide information used in breeding decisions, but also allow each of the ewes to be sorted following each milking. The microchip acts as a key, granting access to only their pen, which is separated by stage of lactation.

Their flock is also fed a total mixed ration, mixed on the farm in an attached shed space.

Wideman says that because of the high copper content in the soil in their area, which can be toxic to sheep, they now control all of their hay production. They also send manure to four different farms, which provides an advantage over cattle manure because it not only has a higher nutrient content, it is also in a solid form.

Ms. J and Company will welcome its fourth generation of sheep produced with Assaf genetics later this year.