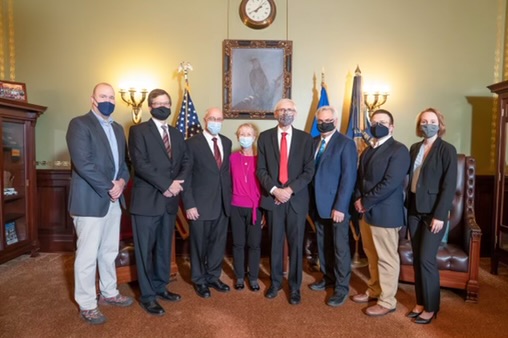 The Wisconsin Cheese Makers Association is thanking Gov. Tony Evers for signing Assembly Bill 314 into law as Act 92. The bill was unanimously approved by both houses of the legislature earlier this fall, following over a year of compelling advocacy from WCMA members and extensive bipartisan collaboration.

“This investment is a smart, necessary boost that will benefit not only our dairy industry, but the state’s entire economy,” says WCMA Executive Director John Umhoefer. “We’re grateful for the leadership of Governor Evers, Wisconsin State Senator Joan Ballweg, and Wisconsin State Representative Tony Kurtz working in united purpose to make this legislation a reality.”

Evers first proposed the creation of a dairy exporting program in a 2020 special session call and included funding for an agricultural exports program in his 2021 budget proposal. Following Ballweg and Kurtz’s introduction of AB 314, both houses of the Wisconsin Legislature, as well as the powerful Joint Finance Committee, unanimously approved the bill.

Act 92 supports a new five-year initiative led by DATCP to boost the export of dairy, meat and other agricultural products by 25 percent. The bill specifies that $2.5 million, or half the total funds appropriated, will be used to increase the export sales of milk, cheese, yogurt, whey and other dairy products.

Among the coalition of groups and individuals directly involved in the bill’s passage were several WCMA members, including Chr. Hansen, Nasonville Dairy, Nelson-Jameson and Specialty Cheese Company.

DATCP will present its plan for executing the initiative to the Joint Finance Committee later this month, with implementation expected for early next year.