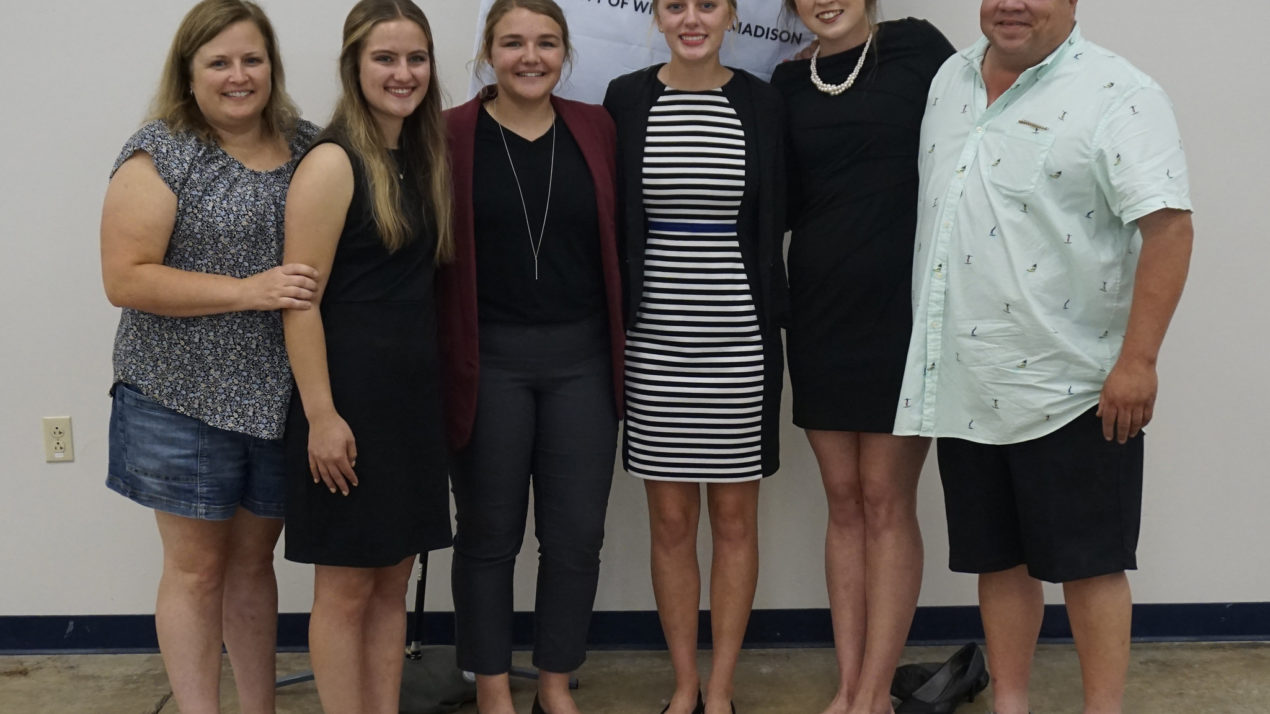 Dairy judging has been in Angie Ulness’s blood for more than two decades, and that isn’t likely to change anytime soon. Ulness, a UW–Madison dairy science graduate, finished second in the National Intercollegiate Dairy Cattle Judging Contest in 1999. Later this month, she will coach a team at the National 4-H Dairy Judging Contest at the World Dairy Expo that includes her daughter, Clarissa, one of her team’s competitors.

Angie and her husband, Mark, himself a UW–Madison dairy science grad, have three younger children coming up through the pipeline. “So I’ll be coaching dairy judging for a really long time,” she says. Ulness grew up on a Door County dairy farm, the daughter of Bill and Clarice Brey. She was a bit reluctant to head off to UW–Madison, where she thought she might be swallowed up in the big university setting. But once on campus, she found plenty of ways to fit in.

“Dairy judging solidified my place at Madison,” she says. “I always wanted to be on the dairy judging team there, and I idolized (former dairy science professor and judging coach) Dave Dickson.” During her college years, Ulness was a member of the Badger Dairy Club and the Association of Women in Agriculture, participated in American Dairy Science Association trips, and earned several internships. “My college experience was amazing,” she relates. “It opened up a lot of doors for me.”

Two years after she graduated, she and Mark were married, and together they bought into the Ulness family farm near Valders where they milk about 75 registered Holsteins. They were winners of the 2008 Distinguished Holstein Breeders award and 2017 National Outstanding Young Farmers contest. Ulness began coaching dairy judging fresh out of college, first with a 4-H team in Door County that won the National 4-H Contest in 2002 and now with the Manitowoc County group. She co-coaches the team with Paul Siemers, operations manager at Siemers Holsteins. This year’s team is the fourth group she has led to the national contest, third in the last 10 years.

“The unique thing about this team is they’re all really good friends,” Ulness says. “They all work with cattle all the time, and they have the right mindset.” Clarissa says representing Wisconsin at the national contest will be an honor and a privilege. “The whole team has been working at this since we were nine,” she says. “The fact that we’re all great friends makes it more special when we can experience it all together.”

Clarissa rode along with her mom to practices and dairy judging competitions for years before she had an opportunity to participate at the senior level. She says it’s special to be able to share the experience with her mother. Is mom tough on her and her teammates? “Sometimes, if she needs to be,” Clarissa says. “After the district contest, she started to be a little harder on us to get us ready for the state contest. Paul and Mom are really good coaches and very supportive. They know what to say, and they push us to be our best.”

Clarissa recently applied to attend UW–Madison in 2022 with plans to study dairy science like her parents. “I feel like [UW–Madison] kind of gets me a little bit of everything – the whole sports atmosphere, the feeling of the city, the world-renowned professors and club opportunities,” Clarissa says. “It’s far enough away but still close enough to home.”

Ulness, Siemers and the team will compete in the national contest on Sept. 27. “The atmosphere is a little intense when you walk in on the colored shavings,” Ulness says. “The 4-H kids are judging alongside the collegiate and post-secondary kids.” Ulness has tried to pass on to her teams what she learned from Dickson and her college dairy judging coach, Ted Halbach, a faculty associate in the Department of Animal and Dairy Sciences. That includes lessons like go with your first impression, have good eye contact and talk in a conversational tone.

Halbach says despite the fact that dairy judging was interrupted a year by the pandemic, the youth program in Wisconsin continues at a high level. “Credit for this success starts at the grassroots with county coach volunteers like Angie along with those dairy producers who open their barns for practices and provide cattle,” he says.

Ulness knows the competition will be tough at this year’s national contest, just as it is every year. “We had a really convincing win at the state contest, but that was a day in August. What happens at the end of September will be a different day. Hopefully the girls are ready to go.” Besides Clarissa, team members include Emma Vos, Jenna Gries and Lauren Siemers, daughter of co-coach Paul Siemers.