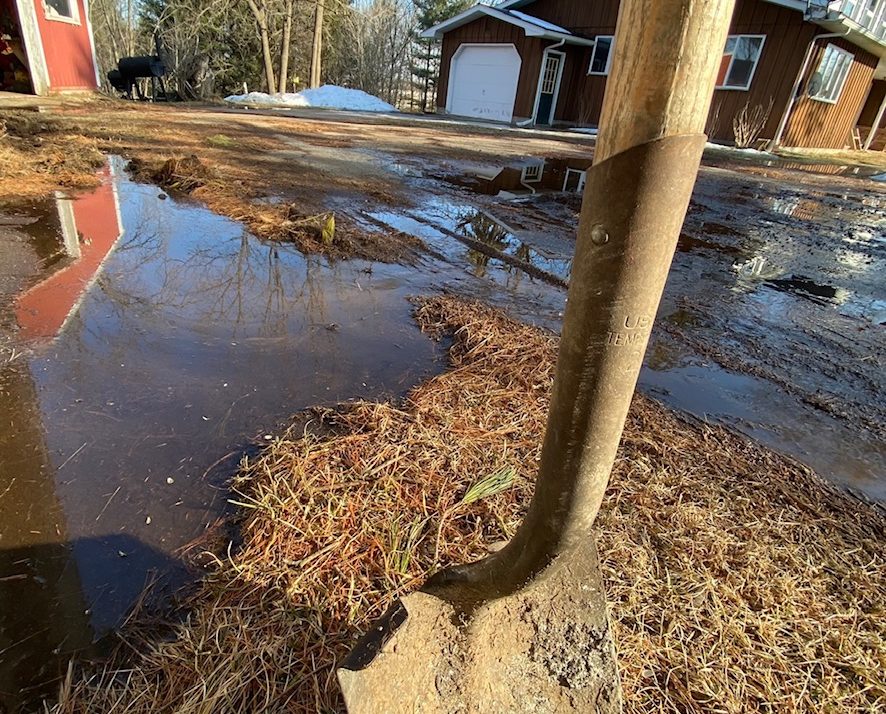 The rounded top of the shovel’s handle pressed into the palm of my right hand as the weight of my left hand and chin pressed down during my expression of March leisure.

Leaning on a shovel in the farmyard on a warm spring-like day isn’t something most up-and-coming young farmers would want to be caught doing, nor do they generally have the time to take such pause. That’s not the case, however, when you’re an old farmer or even an old farm soul who’s reached his later years. And it’s especially not the case when you’re an old fellow accomplishing one of the most important farmyard tasks during those end-of-winter days: Excavating little farmyard ditches to drain the melted snow’s water away from driveways and walking areas.

I’m unsure when I excavated my first end-of-winter ditch on a farm, but I suspect I’d have been at an age when only a single-digit number described my age. I’d watched my grandfather do it, and then watched my father do it – their internal transits estimating the spots that had to be scraped down a titch to best drain the water. Their work created so many tiny streams that knew their ways to join the newly formed rivulets that made their ways to ditches heading all directions from the farmyard.

The ditching was done on those days when their fuzzy yellow chore gloves were left in the house; their five-buckle boots being traded for short two-buckle models to keep their work boots dry. Their footprints in the farmyard’s softening soil were gargantuan compared with the tracks my Tingly-covered feet left within them, a metaphor that lingers even in years since the physical size of my work boots surpassed theirs.

Most of the ditching I learned involves only the top inch or two of the sun-softened soil, the frost holding rock hard the layers below – one of nature’s jokes put upon anyone who has the misguided urge to dig deeply into the soil of late winter and early spring. The shovel’s steel can be heard scraping against the gravel and rocks at the surface and against the frost below; a pickaxe clanking and thumping against the frost when a ditch of any serious depth is needed.

The balance in all of it is to make the process enough work to feel as though something is being accomplished but to not make it real work.

And then, just as I watched in my father and grandfather, I find myself spending some time allowing my small streams’ gurgles to lull me into a certain satisfaction that I somehow have again saved our farmyard from some sort of spring aqua disaster. But mostly, that gurgling water carries me to contemplation about the past and coming season, complete with the magic in the seasons’ evolution.

And then, I fold my hands over the shovel’s handle and lean my chin upon them to watch and listen for a good long spell.

I’ll have stopped somewhere along the south wall of the machine shed or milkhouse or barn, if I’m fortunate – those spots best soaking in the afternoon sun that’s ever-higher in the southern sky as March deepens.

There, I’ll hear the gurgling coos of a sandhill crane flock moving high over the countryside; a purple grackle will scold in its cackles and a cardinal will sing its soft afternoon song from the top of a tree. I’ll see that the finches’ dull winter feathers are giving over to feathers of bright yellow and red.

There, I’ll note the small piles of snow remaining around the farmyard, remnants of winter work I’d done with my tractor to clear the driveways; I’ll wonder how long those little piles and spots of ice on the north sides of buildings will hang on during the warming weather and rain.

A lilac bush will catch my eye; I’ll wonder whether the warm weather will make it bud early, and I’ll wonder when the walnut, oak, catalpa and maple trees will bud.

I’ll inhale deeply the remaining petrichor from a morning rain that woke me that day with its soft rhythmic snare-drumming on the farmhouse’s eaves. And with the inhale comes the pungent odor of newly thawed bovine and equine waste so wonderfully unique to the farm countryside.

There, I’ll try to estimate the date when the spring weather will pause and give over to winter’s annual last-ditch effort to flex its power with a late-season snowstorm.

And there, I’ll continue listening to and watching that water moving through my new ditches, satisfied that my work might be better than the ditches of yore I’d excavated to drain farmyards here and elsewhere.