Home » Blog » News » An important stop for waterway traffic, Lock and Dam 4 near Alma gets $4.5 million in upkeep 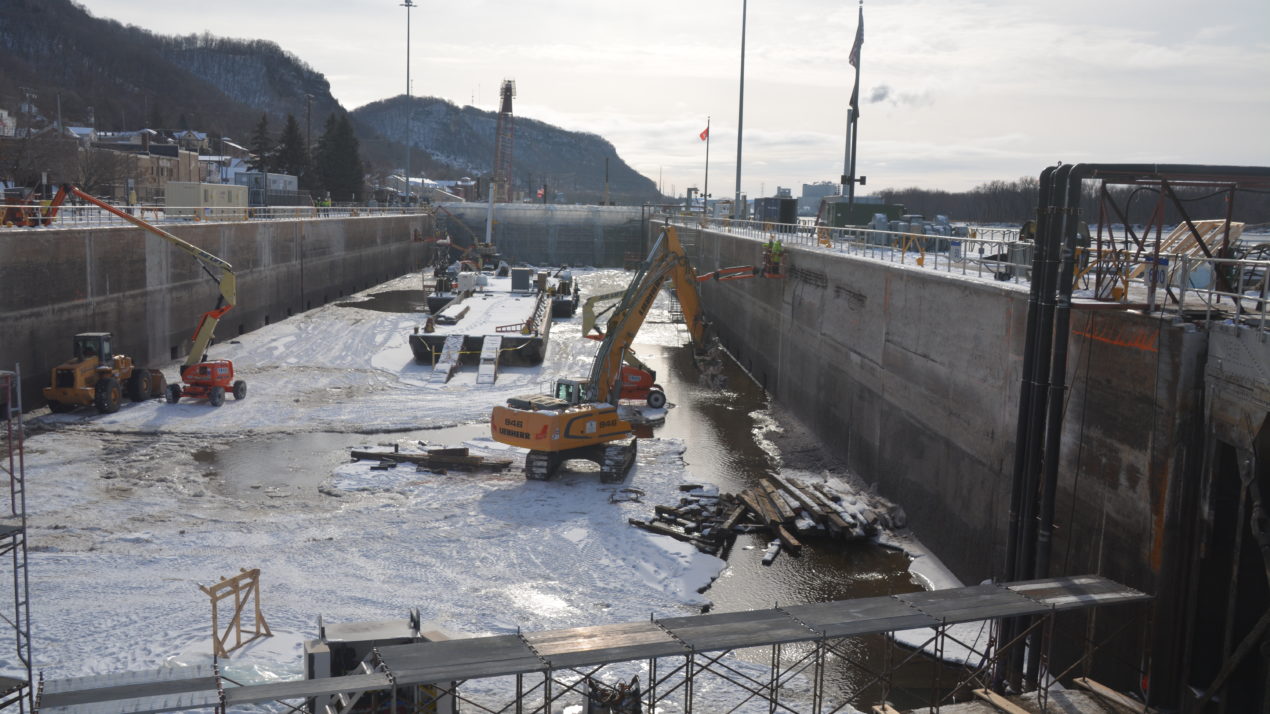 Traffic cones may be mostly off roadways, but winter is waterway construction season.

The U.S. Army Corps of Engineers is currently completing a nearly $4.5 million winter maintenance project in Alma, Wis. at Lock and Dam 4.

Joe Schroetter, project manager, said every dam has about a 20-year cycle where maintenance and repair are required.

“We put big bulkheads on the upstream side of the lock and the downstream side, and then we pump out all of this water and do maintenance like you do maintenance for your car,” Schroetter explained. “If you don’t check your oil, fluids, or brakes and update everything, then your car isn’t going to last.”

He estimated the locks are about 85-years-old and see consistent barge and recreational traffic. The average over the last five years is more than 6,000 loaded barges and roughly over 4,000 recreational traffic units traveling up and down the river. The total commerce that moved through the lock in 2020 added up to 10 million tons of cargo.

“It’s an important lock to maintain as are the others along the Mississippi,” Schroetter said. “What you see going downstream usually is corn and soybeans, and then going upstream you’re looking more like fertilizer, salt, and cement that’s pushed north up to probably the Twin Cities.”

He noted one barge can hold the equivalent to nearly 70 semi-truckloads of cargo.

“If you think of like the carbon footprint that we are saving because of using our barge traffic, it can be substantial,” Schroetter said. “There are reasons why we use the locks and dams and why we keep them up to date, and that’s a huge benefit. Sustainability is a driving force.”

Weather has been ideal for getting work done in the Mississippi River where the crews are on scene 24-hours-a-day to complete the project in an incredibly tight time frame.

“We have the luxury of having the Mississippi River freeze over,” he said. “Believe it or that, it is a luxury. That means the navigation season slows and stops, so we have a certain amount of time that we can get in and do this work.”

In a typical year, the work starts in early December finishes by mid-March.

“Usually on the last day of the non-navigation season, we are starting to pump down the water to get going,” Schroetter said. “It does become a very tight schedule.”

The entire process is broken down into individual parts. Concrete is examined for potential chip hazards, weep holes that could let groundwater into the lock, and other concerns.

Miter gates that open and shut to let the lock work are taken apart, cleaned, and painted. The gates weigh roughly 64 to 66 tons, which requires hydraulic jacks to lift them. Crews cannot use heat while sandblasting the gates because it could cause rust, so those working on the project face the cold, winter temperatures at night.

Underneath the gate, they search for warps or bends, replace grease lines, and grease everything.

A bubbler pipe system that sits at the front of the gates makes sure ice cannot build onto the gates in the winter months, and in the summer months, the system helps stop logs and debris coming down the river from getting stuck in between the gates. Seals, clamps, and belts are all inspected as well.

“We do use our own maintenance and repair crew, and one of the important aspects of that is that they’ve seen those locks and dams,” Schroetter said. “They know the ins and outs. They can recognize issues that may come up as others may not. That is a huge benefit for us.”

Schroetter said he is humbled to be part of amazing projects such as the repair on Lock and Dam 4 and reiterated the importance of having the system as a reliable transportation source.