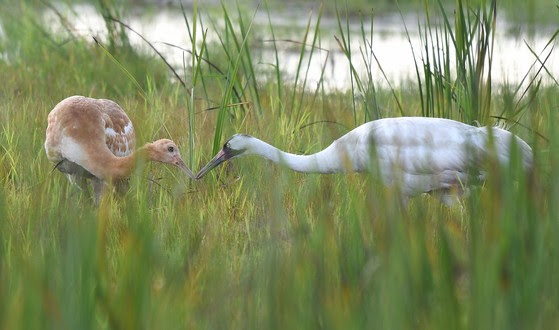 A female whooping crane that made history as the first of its kind known to survive a Wisconsin winter has once again flown into the record books.

Crane #38-17 has successfully paired up and become a mother, producing the first wild whooping crane chick to hatch and fledge from Horicon Marsh. The history-making offspring arrived three years after its mother, hatched and captive-reared in Maryland before being transferred to Wisconsin, became the first known whooping crane to overwinter in Wisconsin instead of migrating south. She survived one of the state’s coldest and longest winters and became a Facebook favorite as anxious fans tuned in to track her survival.

“The survival and successful migration of every chick hatched is important, so #38-17’s survival and maternal status is great news,” said Davin Lopez, a DNR conservation biologist who is part of the whooping crane team. “This wild chick represents several milestones toward the ultimate goal of establishing a self-sustaining migratory flock.”

#38-17 was hatched at Patuxent Wildlife Research Center in Maryland and raised there by parent cranes. She was transported to Wisconsin on Oct. 3, 2017 and released at Horicon National Wildlife Refuge in Dodge County in the hopes she would follow an adult crane and migrate. #38-17 never migrated and she evaded efforts to capture her and fly her south in an airplane.

“She has been very vigilant when we’ve seen her, and she stays hidden pretty well in the marsh, especially when it’s cold,” said Hillary Thompson of the International Crane Foundation.

The crane survived, and in fall 2018, #38-17 headed south for the first time with #63-15 to winter in Illinois. The whooping crane has returned every summer since with #63-15, and the two had a successful nest this year at Horicon National Wildlife Refuge in Dodge County. Their offspring, #W13-20 hatched in mid-May.

Mother, father and their young crane were sighted and photographed by pilot Bev Paulan on Aug. 18, 2020 in Horicon Marsh as part of partner efforts to monitor whooping cranes and their young hatched in the wild.

Partners are hopeful the young family flies south soon and adds to the eastern migratory population of whooping cranes.

Partners including the U.S. Fish & Wildlife Service, International Crane Foundation, Wisconsin DNR and, formerly, Operation Migration have worked for nearly 20 years to establish an eastern migratory flock of whooping cranes that nests primarily in Wisconsin and winters in the southern United States.

Whooping cranes are one of 15 crane species worldwide. This particular species is found only in North America and is the tallest bird in the continent, standing five feet tall. Whooping cranes are endangered; there are only 849 whooping cranes in the world, both wild and captive, although that number is increasing thanks to efforts by the reintroduction team.

Keep Up With The Whoopers And Safe Viewing Tips

Partners establishing the whooping crane population in eastern North America ask anyone who encounters a whooping crane in the wild to please give them the respect and distance they need.