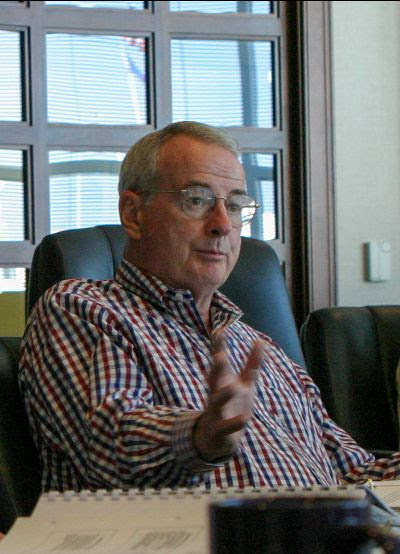 From The Sand County Foundation. Remembering Their Founder, Reed Coleman.

We are sad to announce the passing of Sand County Foundation’s Founder and Chairman Emeritus, Reed Coleman.

Reed was born in 1933 in Madison, Wisconsin, where he lived most of his life. On many weekends during elementary and high school, Reed joined his parents for the short trip north of Madison to their rural property near the banks of the Wisconsin River.

Reed’s father, Tom Coleman, a Madison industrialist, was a dear friend of conservation visionary Aldo Leopold. In fact, he asked Leopold’s wife, Estella, to be Reed’s godmother. Shortly after Aldo Leopold purchased his now famous Shack property, the Colemans became neighbors and partners in a land restoration effort. Tom Coleman had the practical insight to link parcels of land to enhance wildlife habitat. He and Leopold were hunting and fishing buddies who passed down to their children their love of the outdoors and interest in the natural world.

In his later years, Reed fondly recalled time spent near the Shack with some of the Leopold children. After helping to plant trees as part of the restoration of the once farmed but badly depleted properties, they played a game in the woods that they called swinging birches.

As Reed explained it, “You pick a birch tree of a certain size and suppleness, and you shimmy up it. Then you grab it with both hands and you swing out. If you’ve made a good decision it’ll gently drop you down on to the ground, and then you can let go and it’ll go back up. I hate to say it, but those wonderful Leopold children used to stick me on a stiff birch and leave me about 20 feet off the ground.”

A lifelong outdoorsman dedicated to Leopold’s idea of a land ethic, Reed earned a degree in ecology at Northwestern University. He graduated in 1955, and went on to serve in the United State Air Force as an intelligence officer.

In 1964, when Reed’s father passed away, Reed replaced him at the helm of the family-owned business, Madison-Kipp Corporation, a manufacturer of precision components and assemblies for the durable goods market. At 31-years-old, with a growing family of his own, he became the third generation of the Coleman family to lead the enterprise, and remained chairman of the board until 2016.

In the mid 1960s, about fifteen years after the death of Aldo Leopold, floodplain lands close to the Leopold Shack were being subdivided. Reed secured voluntary agreements among neighboring landowners to protect the Shack area from development. There was no roadmap to follow to execute such an agreement, no existing land trusts with comparable voluntary agreements to emulate. But in the end, all of the neighboring landowners signed on to create what they called the Leopold Memorial Reserve – a pioneering venture in cooperative land conservation that ultimately brought Sand County Foundation to life.

Reed’s skilled executive leadership ability, shrewd intellect, unyielding commitment to sound principles, and sense of humor not only led Sand County Foundation through 50 years of improving private land conservation across the U.S. and abroad, but it made him a sought-after board member and volunteer leader of many organizations including Kemper Insurance, Parker Pen Company, and Manpower Inc. Reed also served as the state chairman of the Republican Party of Wisconsin in the early 1970s.

Reed forever saw science as an essential means to evaluate progress towards improved land and water health. It was through his leadership that research capacity was strengthened at The Center for Limnology at the University of Wisconsin-Madison.

He also volunteered his ingenious and creative spirit to benefit numerous nonprofit and civic organizations including The Norman Bassett Foundation, The Lynde and Harry Bradley Foundation, the National Commission on Philanthropy and Civic Renewal, Beloit College, and the United Way. His commitment to measurable philanthropy in general, and to his beloved Sand County Foundation in particular, was unwavering but understated.

“I regarded Reed as a dear and wonderful man who has been a great leader for Sand County Foundation and its work for private land conservation,” she said. “He was a great mentor to me, and a hard act to follow.”

In a 2009 interview, he summed it up this way, “My entire life, the interests that I’ve had are either to start something that needs to be done and to help build it to the point where it’s pretty much routine, then I get out. Or to fix something that’s broken, and once fixed and back on track and operating normally, get out. And one of the things that I really love about Sand County Foundation is that it’s almost always working to fix a broken world. It can never be really fixed. And everyday there’s something new to start.”