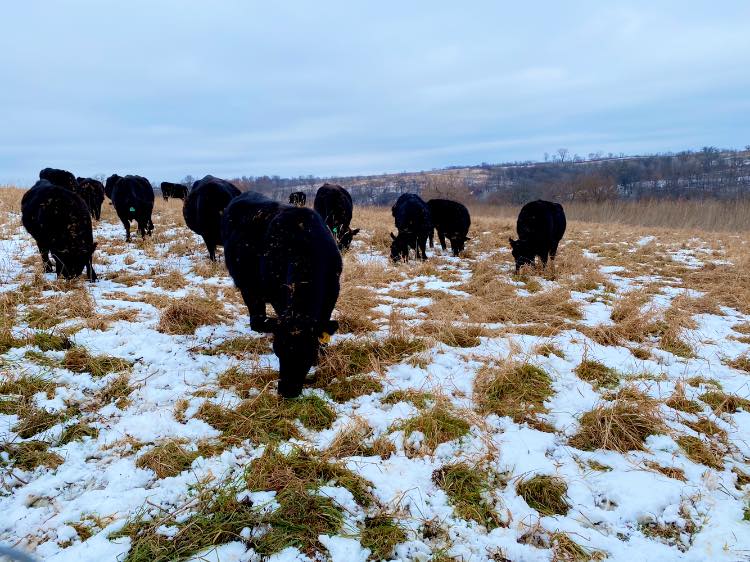 It is a new era for agriculture, which means the next generation is plowing or choosing not to plow, a new path in the industry.

Jordan and Rachelle Meyer operate Wholesome Family Farms with their five children just outside Caledonia, Minn. Jordan represents the fourth generation on his family’s farm, but he and Rachelle have discovered a diversified farming practice that helps them turn problems into profit.

The Meyers raise pigs, turkeys, chickens, and grass-fed beef on their pasture-based farm. Additionally, they farm with Jordan’s father and uncle who milk cows full-time, and they work with his brother on his operation.

“Ever since I was really little and riding with my dad in the tractor, I knew this was what I wanted to do,” Jordan said. “We do a lot of organic row crops, small grains, and integrate our cattle onto our cropland.”

Although Rachelle did not have a farming background, she was a quick convert to the industry. The couple met in high school when she was 14 and he was 15-years-old.

“We’ve been together ever since, and that’s what brought me into the farming world,” Rachelle said. “It’s just beautiful being able to work with your land in your livestock and being able to raise your kids and giving them a future.”

Both a few years shy of 30, the young farmers have always looked for innovative solutions to common problems. The farmland they purchased was organic, and they wanted to keep it that way. However, ragweed quickly became a concern.

“There’s a solution to every problem,” Rachelle said. “It’s just finding that and taking that leap of faith to find a solution. For us, it was one day we just needed to put our cows out on ragweed, and so that’s what we did and found out they love it.”

Jordan noticed the cows were actively selecting ragweed when moved into new paddocks, so he gave a sample to their nutritionist for testing.

“He just laughed at me and took it,” Jordan said. “He came back and it had 29% protein in it. It was rocket fuel.”

“They go after it for a reason,” Rachelle said. “Obviously that has a nutritional value that we don’t know. Animals are selective. They know what their body needs. If you give them the opportunity, they will go after it.”

The Meyers are strong believers in utilizing agricultural diversity with both plants and livestock. The technique is being referred to today as regenerative agriculture.

“We’ve been finding the more and more we focus on soil health, the more and more we’re able to lower our input costs,” Jordan said. “It has made us able to increase our bottom line and make things look a lot better turning all the negatives into positives. Our goal here is to lay the carbon down and increase the health of the soil which increases the health of the plants and people and communities. That’s what we’re after.”

Another anecdotal example of using diversified farming for common pest problems was to let laying hens follow cattle. The Meyers said the chickens consume fly larvae, so they no longer need to cover their cattle with insecticides.

“We’re also turning that fly larva into profits,” Rachelle said. “In return, we’re getting eggs as well as lowering our input costs on our cows. The nutrient density of our eggs is remarkable.”

They sell their meat and poultry products locally. Word of mouth has been big for the business, but the Meyers also offer information online and through Facebook.

Looking ahead to the future of Wholesome Family Farms, Jordan and Rachelle said they will continue striving to produce a good working environment and increase animal and livestock diversity.

“Our goal is to still have a farm when our kids get older,” Rachelle said. “If they don’t want to farm, that’s fine, but we want to give them a good opportunity and sound farm to build a future on for their kids if they want it.”