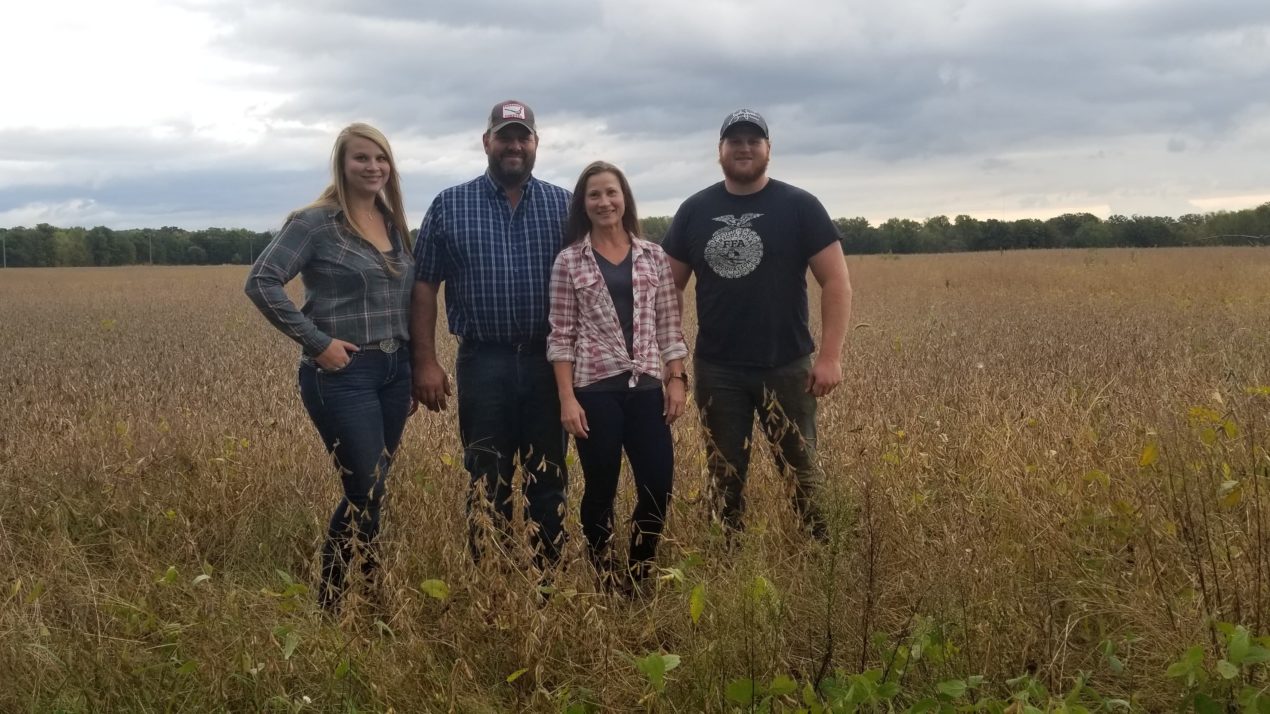 Lake Family Farms from Dunn County has been selected as the recipient of the 2019 Wisconsin Leopold Conservation Award®.

Given in honor of renowned conservationist Aldo Leopold, the award recognizes farmers and foresters who inspire others with their dedication to land, water and wildlife habitat management on private, working land.

Jeff and Kelly Lake are owners of Lake Family Farms in Boyceville. Their farm was revealed as this year’s award recipient at the November 7 meeting of the Board of Agriculture, Trade and Consumer Protection in Madison. The Lakes will be presented with $10,000 and a crystal award at the Wisconsin Farm Bureau Federation’s Annual Meeting in Wisconsin Dells on December 8.

“The Lake family is very deserving of this award,” said Wisconsin Farm Bureau President Jim Holte. “From his involvement with a farmer-led watershed group to his passion for education and partnerships with the University of Wisconsin and UW Discovery Farms, it is obvious that Jeff, and his entire family, is committed to being sustainable today and for generations to come.”

“Jeff Lake and his family are using modern technologies to cultivate the land and resources within their care. Dairy Farmers of Wisconsin congratulates Lake Family Farms for their award-winning environmental stewardship and applauds their willingness to share their knowledge and experiences of conservation practices with the agricultural community,” said Patrick Geoghegan, Dairy Farmers of Wisconsin’s Senior Vice President of Marketing and Industry Relations.

“The Lake family are model land stewards that exemplify the cumulative power conservation practices have on farmland,” said Matt Krueger, Wisconsin Land and Water Conservation Association Executive Director. “From buffer stripping and no-till to pollinator habitats and variable spraying, Jeff and his family show how precision agriculture and conservation work hand-in-hand to improve soil fertility, water quality and crop production. Congratulations to the Lake family as the 2019 Wisconsin Leopold Conservation Award recipients and thank you for your hard work and leadership.”

Earlier this year, owners of Wisconsin farmland and forests were encouraged to apply (or be nominated) for the award. Applications were reviewed by an independent panel of agricultural and conservation leaders. Among the many outstanding Wisconsin landowners nominated for the award were finalists: Bill Ciolkosz of Clark County, and John and Dorothy Priske of Columbia County.

The first Wisconsin Leopold Conservation Award was presented to woodland conservationist Gerry Mich of Appleton in 2006. The 2018 recipient was dairy farmer David Geiser of New Holstein in Calumet County.

In his influential 1949 book, A Sand County Almanac, Leopold called for an ethical relationship between people and the land they own and manage, which he called “an evolutionary possibility and an ecological necessity.”

Sand County Foundation presents the Leopold Conservation Award to private landowners in 20 states with a variety of conservation, agricultural and forestry organizations. For more information on the award, visit www.leopoldconservationaward.org.

Jeff Lake is sentimental about conservation. He wants to preserve his “childhood luxury” of clean water to drink, swim and fish in. He’s a self-described borrower: Borrowing Mother Nature’s resources to make a living as a fifth-generation farmer, and borrowing his ancestors’ land in hopes his children will farm it someday.

Lake Family Farm was a dairy farm until Jeff’s father retired in 1999. Jeff and Kelly Lake and children, April and Jake, grow corn, soybeans and alfalfa to feed a small herd of beef cattle. By embracing innovative management and conservation practices, they are improving their soil’s health, protecting water quality, and creating wildlife habitat, while bolstering the farm’s bottom line.

Jeff’s eyes were opened to modern land stewardship strategies at a local farmer-led watershed committee meeting. Farm biologists were promoting a software that identifies a farm’s unprofitable and environmentally-sensitive areas, and helps guide decisions on alternative uses that can prevent erosion and cut costs. It made him look at his land differently.

Precision technology helps make each of his 1,500 acres the best it can be. Variable-rate planting and spraying have cut his seed and fertilizer costs. In addition to perennial borders that surround his fields, unprofitable areas now provide habitat for deer, pheasants, turkey, insect pollinators and Monarch butterflies. These efforts earned him the first Precision Ag Farmer of the Year Award presented at the National Pheasant and Quail Classic in 2018.

Lake has worked with conservation agencies to care for his farmland by installing buffer strips and adopting a no-till system.

He planted a diverse mix of cover crops on sandy soils that were prone to surface runoff and leaching. The ground cover maintains topsoil by preventing erosion from rain and wind. Cover crops also increase the soil’s organic matter and capture leached nitrates before reaching ground water.

To improve water quality, especially in the nearby Hay River, Lake takes soil samples to ensure his limited use of fertilizer is appropriate. It’s a strategy that is productive, profitable and environmentally responsible.

Lake lists the education of others as the most important conservation practice that he undertakes. He opens his farm to research by agencies and college students. The University of Wisconsin-River Falls has researched the nitrogen efficiency of his corn, and the UW Discovery Farms project has researched surface water phosphate levels. He has hosted events for his local farmer-led watershed committee to help the general public understand what farmers are doing to ensure safe food and a healthy environment.