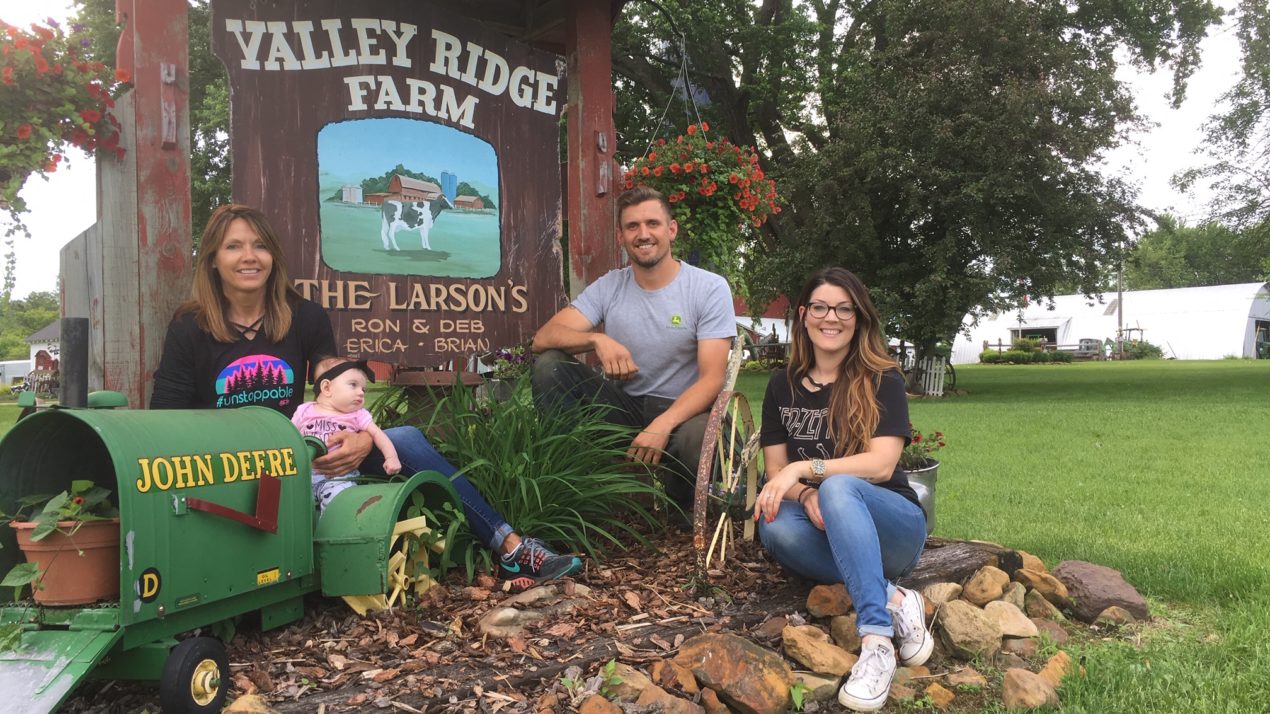 A coin-toss and a turn on a compressor’s pulley might be not be considered the ideal ways to make business decisions, but Brian Larson said those methods are better than relying only on gut instinct.

Larson, who during recent years took over operations of his family’s farm at York in northern Jackson County, used his gut instinct and then added confirmation through the coin-toss and pulley turn to buck a state and national trend by starting to again milk cows at the farm.

The young farmer had left the operation after graduating from high school, attending the University of Wisconsin-Eau Claire and then heading out to work with fitness and personal training. A few years afterward, however, his father – Ron Larson – was stricken with cancer. Ron and his wife Deb decided in 2014 to sell their dairy herd that had been built starting with Ron’s father, John.

During his illness until his death in 2016, Ron continued crop-farming about 900 acres of the operation’s land and some neighboring land. Along the way, Brian promised his father in the fall of 2015 that he’d return to the farm as needed to help whenever Ron’s then-ailing health required.

Brian fully returned to the farm in 2018 and bought into it with Deb – Brian doing cropping and starting a beef grazing. Since then, a gnawing feeling started that he should re-start the dairy operation.

“I don’t know if it was one specific moment, or thought,” he said. “I go into the dairy barn ever day. There were these times of this inner feeling of ‘you should do dairy again.’ But when those thoughts went through my head, a voice said, ‘you’re nuts; you’re crazy.”

But the feeling lasted for months.

“I tried to suppress it for a long time,” he said.

He gave in to the feeling. He also sensed that, with dairy cattle prices low, it might be a good time to get into the business.

“It really was a leap of faith of trusting my gut and trusting the direction and guidance I was feeling – and then, crunching the numbers to see if I could make this feasible and whether I could get the financing,” Larson said.

Though he started realizing that his numbers-crunching could make filling farm’s 85 tie stalls with dairy cattle, Larson sought more affirmation.

Deb Larson and Brian’s fiance Jen Walker said part of the affirmation came with the toss of a coin.

“He said if he flipped it tails three out of five times, that was a sign he should milk cows,” Deb said.

Brian’s family watched as he started to flip the coin.

His mother and fiance confirmed that the 12 straight flips to tails had occurred.

Larson said he didn’t want to invest greatly into the farm’s existing infrastructure to get the dairy operation rolling. Deb had sold the farm’s bulk tank – earlier asking Brian whether there ever would be a chance that he’d milk cows and Brian at the time saying there wasn’t a chance of that.

A milking equipment dealer told Brain that he should check to see whether the milking system’s compressor was rusted into a seized-up condition.
“It was going to cost a couple thousand dollars for a new compressor if I needed a new one,” Larson said.

“That, I figured, would be a deciding factor.”

Larson went to the compressor and found that he couldn’t turn it by hand; he tried to turn it with a wrench and also couldn’t make it turn that way. He tried several times, in his heart wanting the compressor to be usable.

“I couldn’t turn it, and sort of looked up and told my dad and grandpa that, if they want me to milk cows, they’d better make the compressor turn,” he said. “I tried it once more after that, and it turned.”

Larson said he knew the realities that he couldn’t take his gut feelings or even signs so certain as the coin-flip or compressor-turning to a bank to obtain financing for a dairy herd – especially the way the dairy industry has been going during recent years. The numbers he crunched were enough to convince a lender that re-starting the dairy operation was viable, though.

He describes the re-start as feeding from stored forages while working to limit the need for forage-equipment purchases. Having already started with a rotational beef-grazing operation at the farm, though, he said he eventually will explore a hybrid grazing and in-barn feeding operation.

Getting the ration and feeding system in place is important because the herd’s production – and ultimately the farm’s profitability – depends fully upon what the cows eat, he said. That leaves no room for error where feeding is concerned, and Larson said he’s working to hone his skills in that regard.

Overall, though, much of what’s needed for the re-start is in place. A new bulk tank was put into the farm’s milk house during recent days.

“What makes this a little bit unique is being able to utilize what we have here at the farm,” he said. “I told myself I’m not going to invest a million dollars into a new free-stall barn and parlor and really pigeon-hole myself into having to recoup that over the next 20 years. I also wanted to allow myself an easy out if the market goes south.”

He’ll be renting the facilities from Deb.

“The majority of my investment is really going to be in the cows and the little bit of haying equipment that I had to buy back,” Larson said. “The plan is to stay safe and conservative at the beginning,” he said.

Lynn Dairy in Clark County will be picking up the farm’s milk. During the re-start planning, Larson said he hadn’t considered that finding a market for the farm’s milk might be an issue. He originally was going on the old notions that milk plants were vying for farmers’ milk instead of farmers having to find dairy plants to accept their milk.

“Finding a place to send the milk was probably No. 2 after finding the financing,” Larson said. “I didn’t know that was a thing, at first.”

The farmer said he’s designing a work schedule for him and some limited hired help so that he manages the herd instead of the herd managing him. Jen is from the Chicago area and has an off-farm job; Deb didn’t have plans to return to milking cows, which leaves the bulk of the chores on the shoulders of Brian and his planned help from farm-hands.

“My mom was a trooper,” he said. “She milked morning and night for most of the time I was growing up; she was the essentially the main milker. She claims that she’s retired, but I’ve asked her if she can help with some emergency milking.”

Larson took a deep breath and said he’s ready to get the operation under way – something that, a few years ago, he’d have surprised himself by considering such a notion.