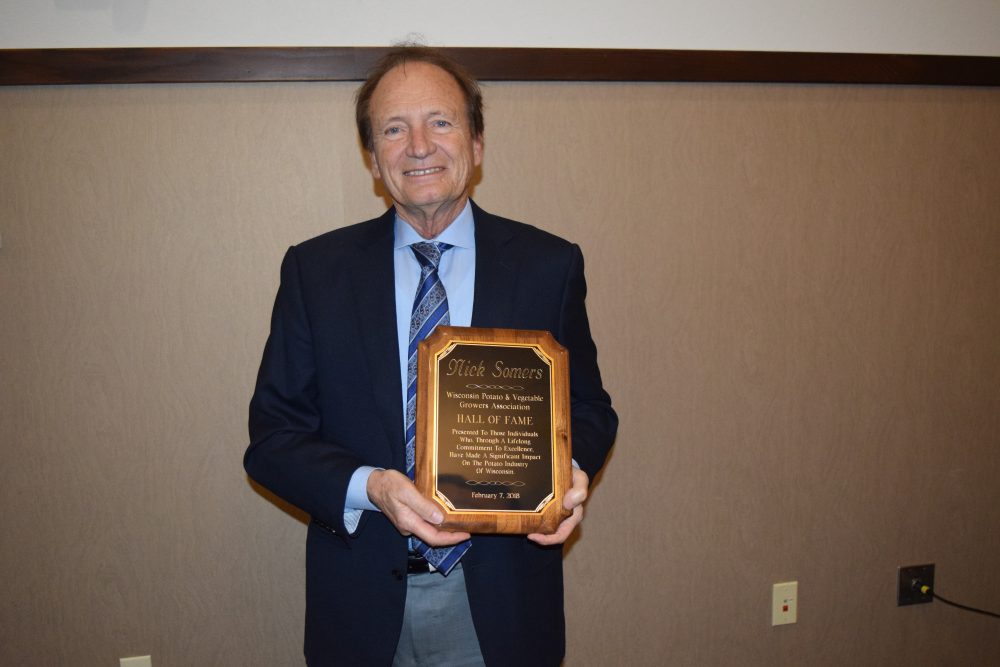 The Wisconsin Potato & Vegetable Growers Association Hall of Fame honors lifetime achievement in the development of the state’s potato industry. It is the intention of the association to continue to honor individuals who have made significant contributions to the potato industry in Wisconsin by making annual Hall of Fame inductions.

This year’s recipient Nick Somers was born and raised in the Stevens Point area and started farming full time in 1968. Today, Plover River Farms raises over 3,500 acres of potatoes, sweet corn, peas and soybeans, including more than 1,100 acres of fresh, processed and organic potatoes.

Somers’ dedication and involvement in the potato and vegetable industry over his lifetime are immeasurable, in time, energy and accomplishments. He started on the local level receiving the Portage County Young Farmer of the Year award. He then became involved with the Wisconsin Potato & Vegetable Growers Association and later was active at the national level on the United States Potato Board and on the National Potato Council (NPC).

He became President of the NPC in 1998 after serving as vice president of Environmental Affairs for three years. During that time, he worked diligently with the Environmental Protection Agency, encouraging them to approve newer and softer chemicals in a timely manner so that the growers always had a dependable product available to use for their pest and disease situations.  In 2000, Nick, on behalf of his farm, was honored with the prestigious NPC Environmental Stewardship award.

On the U.S. Potato Board (now known as Potatoes USA), Nick helped increase the “penny check-off” program that created funds for the promotion of potatoes on the national level. It was an important time since many new “diet gurus” started omitting potatoes from their prescribed diets. The true story needed to be told with potato facts, and the USPB now had more funds to promote and advertise the potato industry story.

Nick is also on the WPVGA Promotions Committee and made the motion for the idea of the Spudmobile. It took years of discussion and research before the Spudmobile became a reality, but it has proven to be a successful promotional tool for the industry.

Somers is a continual promoter of the industry. He’s on the Spud Bowl Committee, often helps with the Spudmobile promotions, visits the produce section of every food store, often encouraging the produce manager to display potatoes more visibly, and he looks for every opportunity to discuss the benefits of eating potatoes, even with people sitting next to him on an airplane.

Nick and his wife, Dianne, have two children, Douglas and Heidi, one son-in-law, Mike Foote, and two grandchildren, Leanna and Amelia. Nick and Dianne will celebrate their 50th wedding anniversary this year!