Home » Blog » News » Jones And Breneman – Cattlemen Of The Year

About 200 beef producers from across Wisconsin braved wintery weather for the 2018 Wisconsin Cattlemen Association annual convention in Wisconsin Dells Friday and Saturday.

Ryan Goodman, Grassroots Advocate with the National Cattlemen’s Association, was a keynote speaker that helped the audience understand how curious consumers are about where their food comes from, and how critical it is that farmers share their story in a number of different ways.  Goodman told Pam Jahnke that some farmers aren’t real comfortable working with social media to tell their story, but that shouldn’t stop them!  Goodman suggested that farmers consider writing a letter to the editor to start dialog.  Maybe go to the grocery store and actually thank customers that buy beef, and help them understand that you’re one of those family farmers happy to produce the product they’re buying.

Dr. BJ Jones of Wildcat Cattle Company in Darlington was one recipient.  Jones got his start in the Hereford business as a 12 year old kid from the suburbs.  He and his parents had little working knowledge about what it took to raise cattle but were determined to learn all they could.  He purchased his first show heifer and attended his first JNHE in 1984 in Des Moines. BJ and family have been actively involved in WI Hereford Association and then in 2006 BJ became the co-advisor of the Wisconsin Junior Hereford Association.

There is no better way to describe the impact has made on the Hereford youth he has advised than to some of them for their perspective directly.  Over the last 10 years of BJ’s leadership, the membership of the Wisconsin Junior Hereford Association has grown this to the largest in its history.

BJ asked Sondra Brancel to co-chair the efforts to host the 2016 Junior National Hereford Expo in Madison.  Sondra was happy to accept this role with BJ she said  “I had the opportunity to work with someone who is as passionate as anyone in this organization about creating a memorable experience for all the families from across this entire country attending junior nationals. He does is to the best of his ability and I couldn’t be more proud to have worked along side him over these last few years of planning and preparation.”   Another highlight of the event, their daughter Bailey received the jacket to be on the National Junior Hereford Association of Directors. 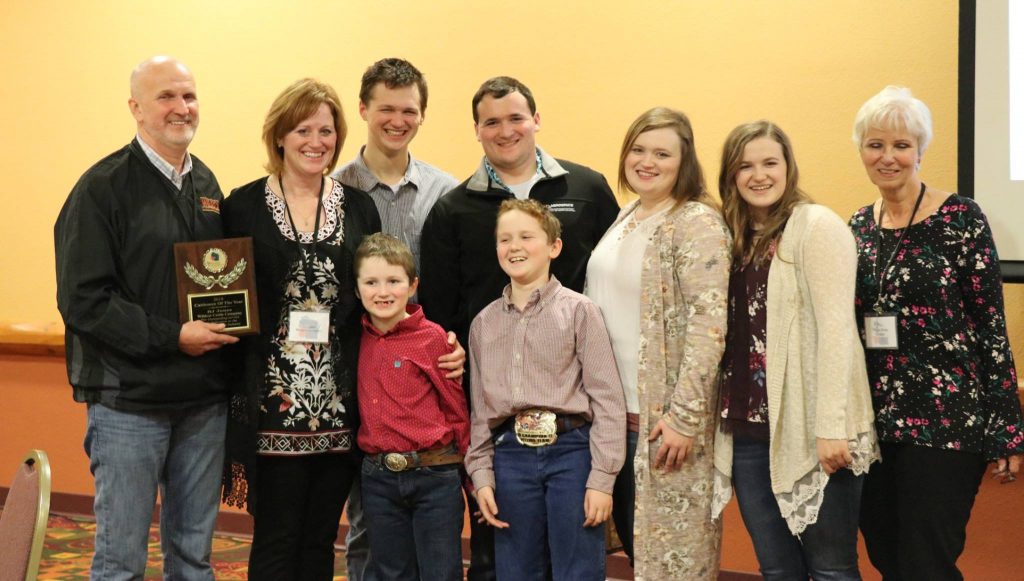 Dr. BJ and Kim Jones own the family enterprise Wildcat Cattle Company Wildcat Cattle Company located in Darlington, WI along with their children Baily, Brett, Riley, Lauren, Brady, and Nicholas. BJ currently works as a large animal veterinarian at the Central Hill Veterinary Clinic.  Kim works as in independent Marketing Consultant and the kids are instrumental in running the show string.

Today Wildcat Cattle Company is 28-acre farm based in the rolling hills of Darlington, WI.  The goal is to raise sound, stout and stylish cattle the complete in the show ring and perform in the pasture.  Their herd consists of 20 select cows and recipients using 100 artificial insemination and embryo transfer.  Today the results of this focus intensive breeding program has let to several successes in the show ring at the state and national level.

The second recipient of the “Cattlemen of the Year” was Matt Breneman from Pardeeville!

Breneman attended the University of Wisconsin Plattville to obtain his degree in Animal Science.  After graduation he went to University of Nebraska to participate in the UNL feedyard management internship program.  After the completing the program he returned home and started to grow his crop and feedlot operation.

He’s started to develop bulls for Gaffney Family Cattle and other seedstock producers.   He continue to feed over 500 head of Holstein feeders per year, he maintains 400-head cow-herd where he would either background or finish the calves generated in the herd and farms 1600 acres.

In 2014 as a result of developing bulls, he caught the attention of ABS Global and was able contract with ABS to house females as part of their genetic development program.  As results, Matt was able to remodel and build a more functional handling facility.  He is always open to implementing new technology and seeking out strategies to improve his management.

He continues to develop relationships with seedstock producers and last year was able to build new facility to develop and sell bulls.  He also has been about to be an embryo transfer cooperator herd for seedstock producers.  This week, Matt will host the first bull sale his facility with Gaffney Family Cattle and Lintz Heritage Angus.

Matt is married to Kelly and they have 3 kids (names?)

Matt has also agreed to host the WCA summer tour in June and we are proud to award him Cattlemen of the Year.

The 2019 WI Cattlemen Convention will be Feb. 8-9 at the Chula Vista Resort in WI Dells.