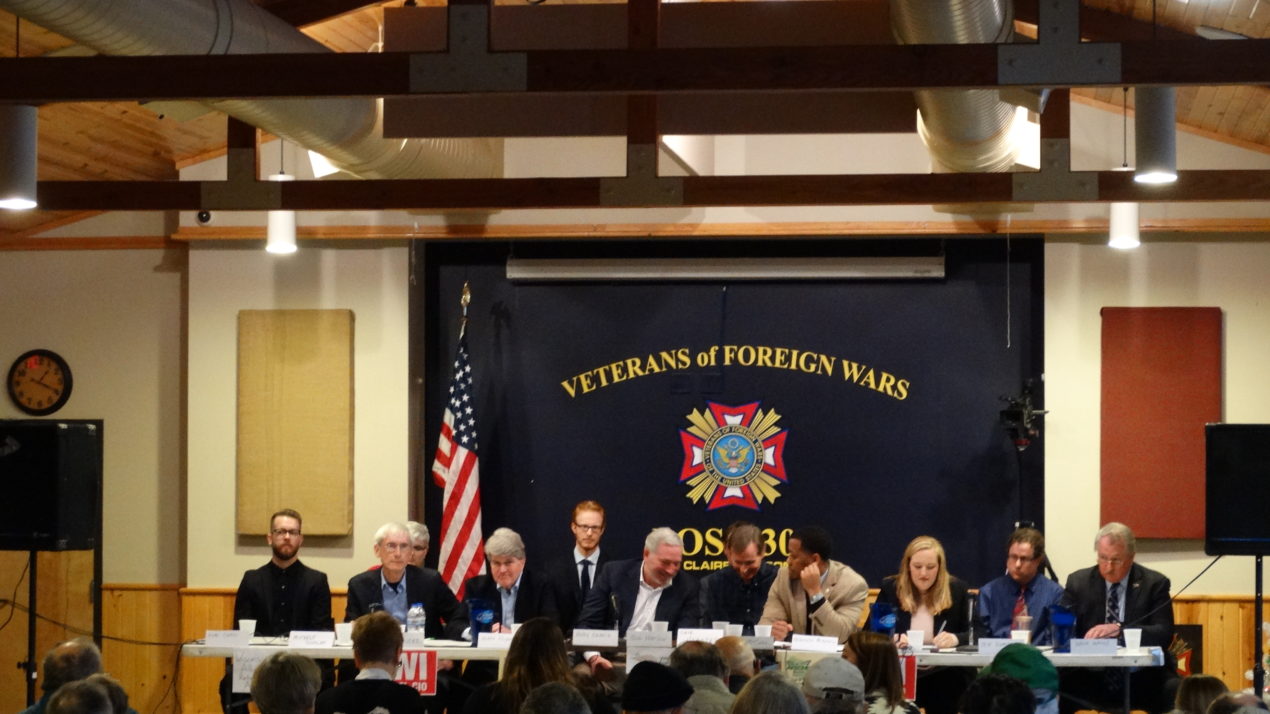 Candidates for Wisconsin governor shared their stances during a 2018 gubernatorial candidate forum hosted by Wisconsin Farmers Union, AFSCME Subchapter 63, Wisconsin Alliance for Retired Americans, Wisconsin AFL-CIO, and One Wisconsin Now at the VFW Post 305 banquet hall in Eau Claire. The event was moderated by Analiese Eicher of One Wisconsin Now.

One of the three questions candidates responded to addressed a chief Farmers Union concern:  farmers’ access to land. Wisconsin’s anti-corporate farming law prohibits publicly traded corporations from owning farmland in the state, but the statute contains a loophole that allows investment funds to own farmland. Candidates were asked whether they would support closing that loophole so farmers do not have to compete against investment funds when purchasing land.

The following were some of the responses from the candidates.

Mike McCabe expressed support for closing the investment fund loophole in the anti-corporate farming law. He also noted that he supports a statewide moratorium on new Concentrated Animal Feeding Operations and stated that we need to incentivize smaller-scale sustainable agriculture.

“I come from a farm, and it breaks my heart to see how agriculture is evolving,” McCabe said.  “Our family decided to forgo health insurance …  [and] didn’t eat the cheese that our milk went to make – we ate Velveeta instead – to remain profitable. One thing we would not do to remain profitable was poison the neighbors [or] dry up local streams or lakes by sinking high-capacity wells.  We have to put our government squarely on the side of sustainable smaller-scale agriculture, and today our government has been put on the side of massive industrialization of agriculture. That’s the wrong side.”

Bob Harlow did not speak directly to the loophole, instead addressing the issue that farmland is finite. “Because arable land is so precious, we must look long term to protect the productive capability of Wisconsin’s farmland.”

Kelda Roys supported closing the loophole, noting that farming is a cornerstone of the state’s economy and part of our cultural heritage. “When we sell off farmland to the highest bidder … it increases food costs for everyone in our state. It also robs us of the multiplier effect that keeping money local has.” She added that keeping farmland in the hands of farmers “also makes environmental common sense. A farmer who lives on the land and works it is going to be thinking about the long-term health of the soil and water, and you just can’t replace that with a multi-national corporation or an investment fund that’s going to be working on the whims of Wall Street and trying to maximize profitability.”

Tony Evers stated, “There’s no way that farmers can compete and afford to buy the land that’s owned by a well-funded investment company. As we think about who owns those lands – those investment companies – they go out of their way to buy tillable land without buildings on it… and they only want one tenant. So what is happening is that we have larger and larger farms because of the investment companies that are buying up land all across the state of Wisconsin.”

“Fixing this loophole is a no-brainer – I think this will have bipartisan support” Evers said.

Evers also noted that he supports an independent Wisconsin Department of Natural Resources Secretary, rather than the current process of the DNR secretary being appointed by the governor.

“I was glad to see this question on the agenda, because it rarely comes up,” said candidate Matt Flynn. “What’s described as one loophole is not one loophole; it’s like Swiss cheese – there’s nothing but loopholes in that statute. We have to go back to the drawing board and redraft that statute to keep corporations out of owning farmland.”

Andy Gronik did not specifically voice support for closing the investment fund loophole in state statute. Instead he spoke in general terms about supporting for small, medium, and large farms, and mentioned regional manure digesters, renewable fuels, nitrogen management technologies, making it easier to transition to organic by changing the three-year transition period, and supporting farm-to-table efforts.

Candidate Dana Wachs used the question as an opportunity to attack Governor Walker, stating “Walker is happy to let the family farms fail, as long as there is massive corporate wealth that comes into the political system.” Wachs did support closing the investment fund loophole, and also mentioned digesters and farm-based renewable fuels, as well as support for shifting to an independent DNR secretary.

Jeff Rumbaugh of Madison is also in favor of closing the loophole. “The family farm is becoming a rarity in Wisconsin. That is because the corporate farms are moving in.” He also noted that “the family farms generally treat the environment better” and create more jobs per acre than corporate farms.

Ryan Cason, the only Republican to participate in the forum, was also in favor of closing the loophole and claimed he would have the power to end it the moment he was in office.  “I am in support of closing the loophole, and here’s the difference. While some have said during this forum that they would work as quickly as possible to close the loophole … I know, because I read the Wisconsin Constitution and the Wisconsin statutes, that I have all the power, if I’m elected as governor, to end it the moment I get into office. That’s the difference – I’ll get up there and get it done.”

“We’re seeing a trend not just here in Wisconsin, but around the country where investment firms come in, buy land … so they can turn around and rent the land to the farmer, and that is pricing people out. When I started in 1997 with the Fire Service we had 22,000 dairy farms. Now we’re looking at less than 10,000 dairy farmers. We need to re-invest in farms, and re-invest in what makes Wisconsin great.”  Mitchell also mentioned the importance of protecting Wisconsin’s natural resources need for better high-speed internet in rural areas.

Michele Doolan stated it simply: “I support closing the loophole because it undermines the intent of the law, doesn’t it?”

“Absolutely close the loophole,” said Dave Heaster. “The spirit of that law to begin with was to protect the farmer.”

Note for the press and the public:  The full debate can be viewed via Wisconsin Eye at http://www.wiseye.org/

The question about closing the farmland ownership investment fund loophole starts at 31:20.

The question about education funding starts at 54:30.

The question about Retirement Security starts at 1:20:00.