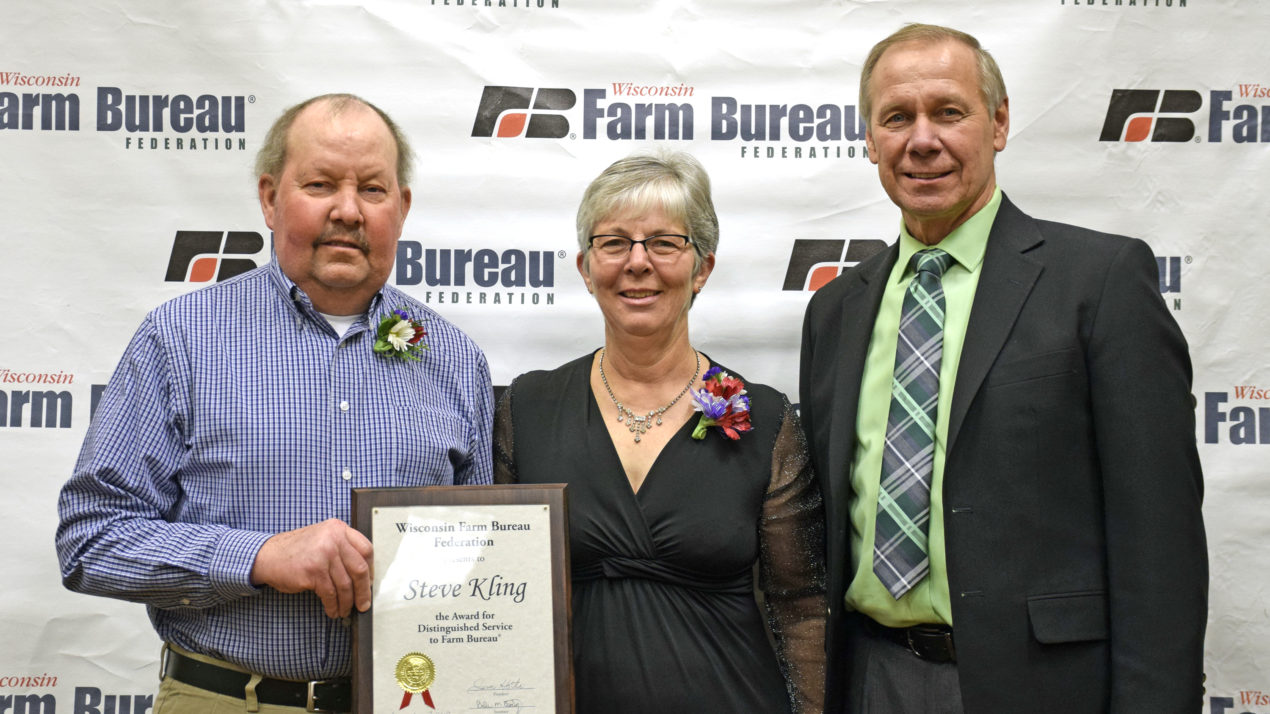 “It is because of his selfless dedication to others and agriculture that I am extremely proud to recognize Steve’s distinguished service to Farm Bureau,” said WFBF President Jim Holte.

Kling was presented the Distinguished Service to Farm Bureau award during the organization’s 98th Annual Meeting in the Wisconsin Dells on December 3.

Kling has been an active member of Farm Bureau for 39 years and served in key leadership roles at county and state levels.

“Steve is an advocate for Farm Bureau and has devoted countless hours during his years as Jackson County Farm Bureau president,” said Holte. “His leadership and experience are assets to our organization.”

Along with leadership in Jackson County, he has also attended the Farm Bureau leader trip to Washington, D.C. and makes it a point to attend Ag Day at the Capitol. Kling has also served on the WFBF Dairy Committee and Policy Development Committee. He has been a Farm Bureau Proud Club (formally Producer Club) member numerous times and has signed more than 35 new Farm Bureau members.

Kling was also instrumental in the creation of the annual District 4 policy development meeting. In the mid-2000s, with the help of Todd Quarne of Trempealeau County, they brought county Farm Bureau leaders together to discuss policy resolutions as a district for the first time.

“Steve truly embodies what Farm Bureau is about,” said Darby Sampson, Jackson County Farm Bureau promotion and education chair. “He is a member at a local level making an impact in Farm Bureau that reaches all the way to the top of our organization. He is paving the way for generations to come.”

The Kling’s dedication to agriculture does not stop with their involvement in Farm Bureau. Kling and his wife, Pat, have also hosted the Jackson County Dairy Breakfast twice. They were the 2016 Jackson County Farm Family of the year and 2012 Farm Family of the La Crosse Farm Show. Then in 2005, they received the Jackson County Land Conservation Department Watershed Farmer Award and were finalists for the 2012 Leopold Conservation Award. No to mention the couple has hosted more than eight foreign exchange students through 4-H and DFA programs.

“To Steve Kling, Farm Bureau isn’t just an ordinary organization; it’s an organization made up of neighbors, friends and family from across the state and nation that come together for a common cause,” said Sampson.

For more information on the Wisconsin Farm Bureau Federation, their annual meeting and awards visit, https://wfbf.com/