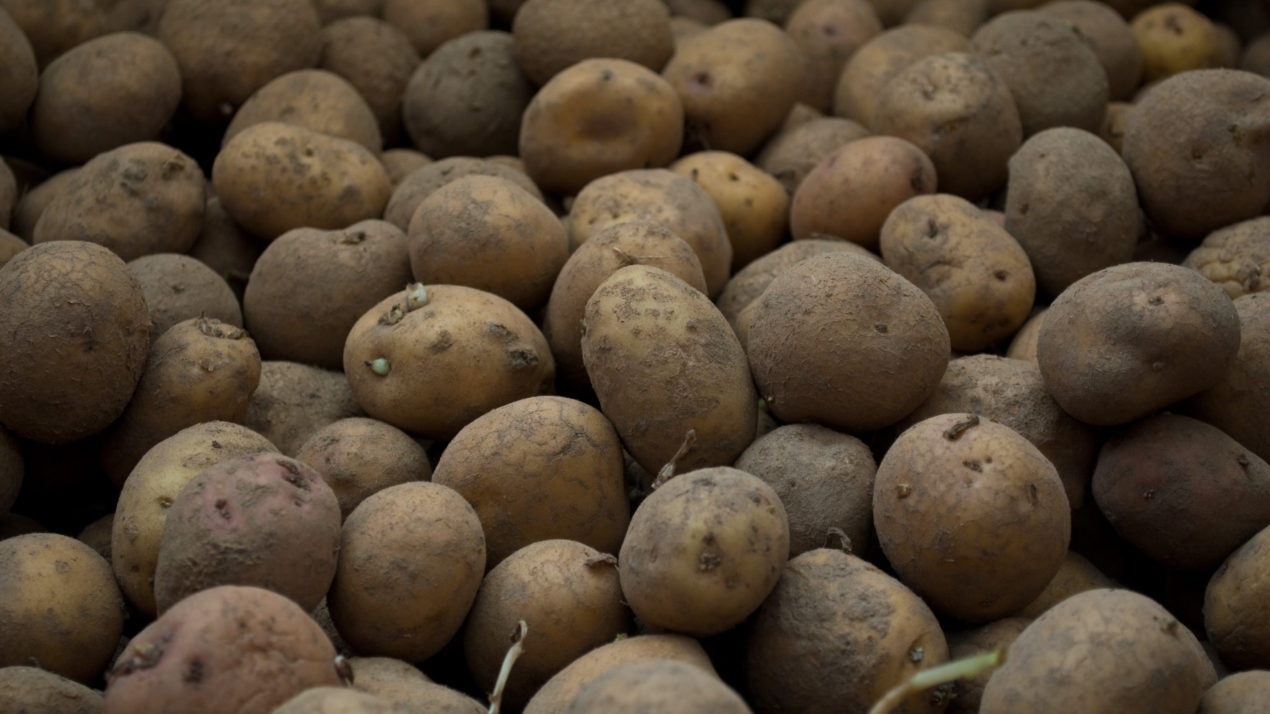 The Hancock Agricultural Research Station is located along Interstate 39 between Stevens Point and Portage. The location is in the middle of the Central Sands area of Wisconsin, one of the most productive potato-growing regions in the country. The Station holds a central role in the Wisconsin-oriented potato research. In 2006, the Wisconsin Potato & Vegetable Growers Association raised $3.2 million for the storage building on-site.

The Hancock Agricultural Research Center, currently stores potato samples to see how well they will last in storage. The Center’s equipment operator Sam Perez keeps a close eye on the stored samples. Perez and other station employees monitor the potato sugar levels; fry test batches of potato chips, and other techniques that can be used to help growers decide when to market their stored potatoes. On average waiting longer to sell potatoes means a higher price, but only if the potatoes are sound and un-sprouted.

Storage is a big concern for UW–Madison horticulturists who breed and grow potatoes at the station.

“One goal of the breeding and storage programs is to have families eating Wisconsin potatoes at the July Fourth barbecue,” says Amber Gotch, who works alongside Perez in the lab. “That requires 10 months of safe storage.”

Perez spends about half his year tending to the potatoes in the storage facility. Then when fieldwork begins, Perez moves outside as one of the site’s field technicians where he also performs preventive maintenance and repair on the station’s farm equipment and vehicles.

During four years at Hancock Agricultural Research Station, Sam Perez has earned a reputation as methodical and willing to handle any task. Those qualities made him one of eight University of Wisconsin–Madison employees to receive the 2017 University Staff Recognition Award.

Luck played a significant role in delivering Perez to the job he loves. Sam and his wife Andrea Perez, both Chicago natives, first moved to Wautoma in 2000 and found the Central Sands a welcome relief from the big city life. After some time in Florida they decided in 2012 to return to Wisconsin. Unable to decide where to live, they taped a state map to the wall and threw a dart. It struck within spitting distance of the Hancock station. Perez, who had previously worked on potato farms and knew the area, applied for a job.

In the years since, he’s proven to be a jack of all trades, master of many, and reliable and hardworking enough for Troy Fishler, Hancock’s storage facility manager, to nominate him for the staff award.

“Sam is always willing to go out of his way,” says Fishler. “He knows our mission is to facilitate the research that professors and staff come to do, and they are always taken care of. He’s very generous with his time, and is an absolute pleasure to work with, and he has this enormous positive attitude. Some people will fight tooth and nail to get out of the less desirable jobs, but he takes it as just another day; he’s always willing to help out.”

Before he moved to Wisconsin, Perez was working as a courier for Chicago law firms, “and didn’t know anything about farming or mechanics.” He proved a quick study. “Every machine, I found I could take it apart and put it together like brand new,” he says. “When I take apart an engine completely and put it back together, the initial start is the best feeling. Just to know what you did, that counts for something.”

Some of his skills, Perez says, came from his father, who knew no English when he came from Mexico. “Dad started his own home remodeling company, and I would tag along and watch everything he did,” Perez says. “I just picked it up. He also worked on cars, would take one apart, take the engine out and put another in. We had our ups and downs, but everything I know is from him.”

Mechanics is both a vocation and an avocation for him, and hard work is a gift, not a burden, Perez says. “I take the days one at a time,” he says. “I try to live life to its fullest, because you never know what tomorrow is going to bring.”