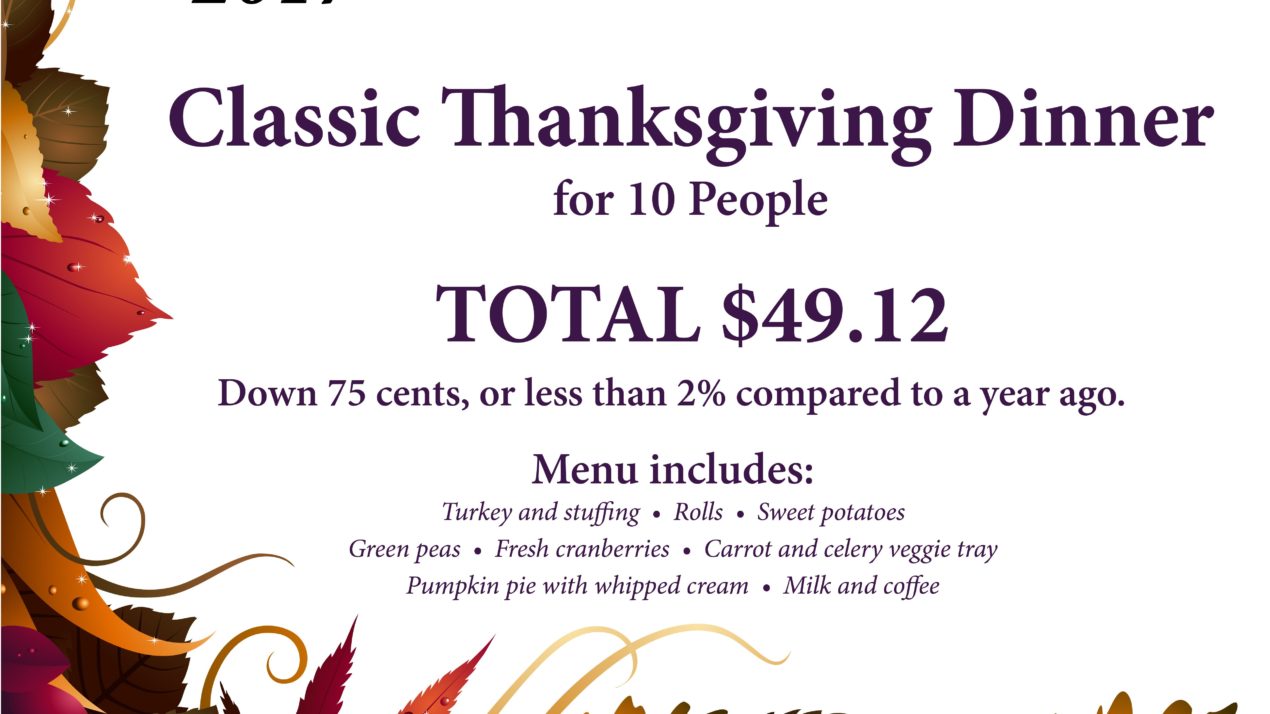 American Farm Bureau Federation’s 32nd annual price survey of classic items found on the Thanksgiving Day dinner table indicates the average cost of this year’s feast for 10 is $49.12, a 75-cent decrease from last year’s average of $49.87.

“For the second consecutive year, the overall cost of Thanksgiving dinner has declined,” AFBF Director of Market Intelligence Dr. John Newton said. “The cost of the dinner is the lowest since 2013 and second-lowest since 2011. Even as America’s family farmers and ranchers continue to face economic challenges, they remain committed to providing a safe, abundant and affordable food supply for consumers at Thanksgiving and throughout the year.”

The shopping list for Farm Bureau’s informal survey includes turkey, bread stuffing, sweet potatoes, rolls with butter, peas, cranberries, a veggie tray, pumpkin pie with whipped cream, and coffee and milk, all in quantities sufficient to serve a family of 10 with plenty for leftovers.

Foods showing the largest decreases this year in addition to turkey, were a gallon of milk, $2.99; a dozen rolls, $2.26; two nine-inch pie shells, $2.45; a 3-pound bag of sweet potatoes, $3.52; a 1-pound bag of green peas, $1.53; and a group of miscellaneous items including coffee and ingredients necessary to prepare the meal (butter, evaporated milk, onions, eggs, sugar and flour), $2.72.

“Milk production has increased, resulting in continued low retail prices,” Newton said. “In addition, grocers often use milk as a loss leader to entice consumers to shop at their stores.”

“Whole whipping cream is up about 4 percent in price, due to increased consumer demand for full-fat dairy products,” Newton said.

The stable average price reported this year by Farm Bureau for a classic Thanksgiving dinner tracks with the government’s Consumer Price Index for food eaten at home. But while the most recent CPI report for food at home shows a 0.5 percent increase over the past year (available online at http://www.bls.gov/news.release/cpi.nr0.htm), the Farm Bureau survey shows a 1.5 percent decline.

After adjusting for inflation, the cost of a Thanksgiving dinner is $20.54, the lowest level since 2013.

A total of 141 volunteer shoppers checked prices at grocery stores in 39 states for this year’s survey. Farm Bureau volunteer shoppers are asked to look for the best possible prices, without taking advantage of special promotional coupons or purchase deals, such as spending $50 and receiving a free turkey.

Shoppers with an eye for bargains in all areas of the country should be able to purchase individual menu items at prices comparable to the Farm Bureau survey averages. Another option for busy families without a lot of time to cook is ready-to-eat Thanksgiving meals for up to 10 people, with all the trimmings, which are available at many supermarkets and take-out restaurants for around $50 to $75.

The AFBF Thanksgiving dinner survey was first conducted in 1986. While Farm Bureau does not make any scientific claims about the data, it is an informal gauge of price trends around the nation. Farm Bureau’s survey menu has remained unchanged since 1986 to allow for consistent price comparisons.