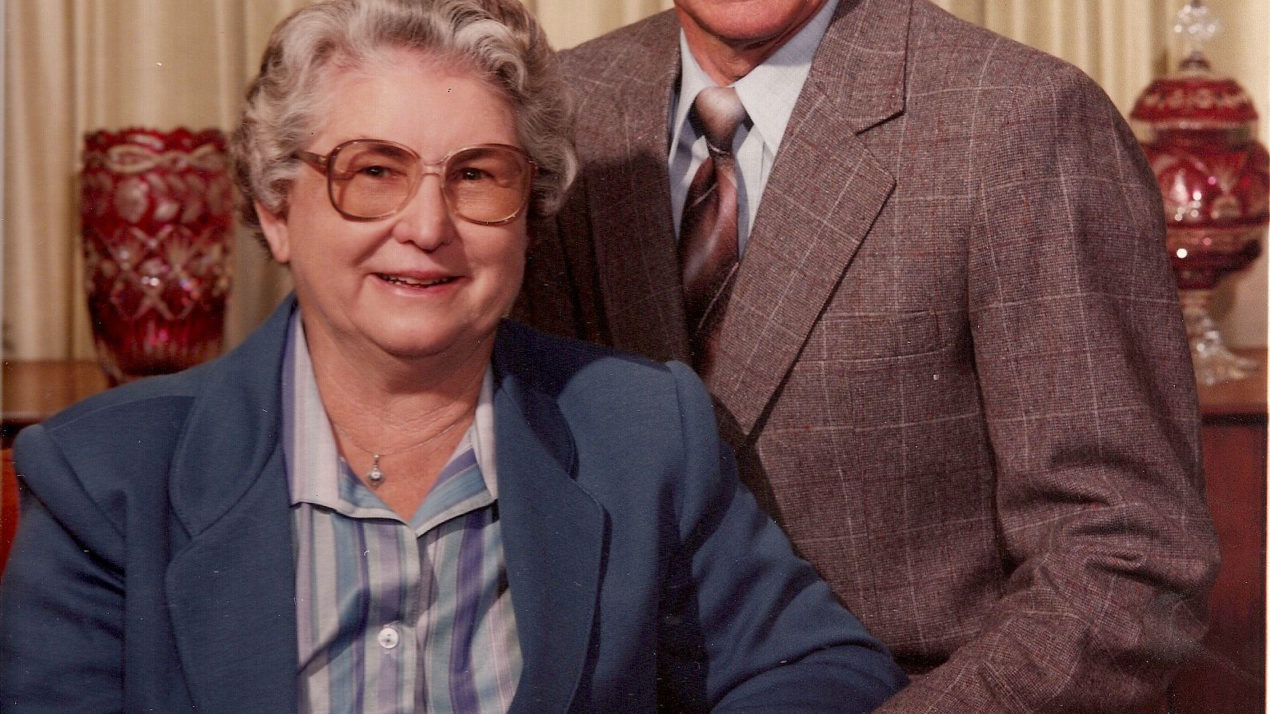 “We talked about dividing the collection between the family members, selling it through an auction house, donating it to the Museum of American Glass in West Virginia in order to keep the collection together, but ultimately we decided to give Clinton and Ellen’s cranberry glass collection to the Wisconsin Cranberry Discovery Center,” said daughter-in-law Lorry Erickson.

The family is keeping some of their favorite pieces, but the majority of the collection is being donated to the Cranberry Discovery Center in downtown Warrens, Wis. Some of the glass will be showcased in the center’s Exhibit Hall, but most of the collection will be offered for sale to help raise funds for the non-profit museum.

Clinton and Ellen purchased their first piece of cranberry glass – a candy dish – in January 1947 using money they had received as a wedding gift from Clinton’s mother, Eva Potter.

The couple didn’t begin collecting cranberry glass in earnest, however, until the late 1980s. By then they were semi-retired from the cranberry marsh and had more time to travel. During their winter vacations in Florida, they would visit antique shops and often fill their camper with cranberry glass to bring home to Wisconsin.

“They had a pretty good system. By then Mom was having more trouble getting around, so Dad with his longer legs would scout out the antique shops looking for cranberry glass and tell Mom where to look. It was something they really enjoyed doing together,” said Jack Potter.

While the Potters did buy new cranberry glass, Ellen’s main interest was antique cranberry glass. Daughter Becky Hayes said some of the glass in her parents’ collection dates back to the early 1800s.

The couple purchased cranberry glass from well-known makers like Fenton, Rossi and Pilgrim, but they also have pieces by Hobbs, Moser, Moholt, Cambridge, Union Glass and Northwood Glass companies. Some of their glass is from England, Austria, Germany, Bohemia and Czechoslovakia.

Ellen tried to determine the age and maker of each item she purchased, and kept careful records of her acquisitions. In a 1997 interview with Glass Collector’s Digest, Ellen said, “Each piece has a story to tell. Most items remind me of trips taken, places visited or other special occasions.”

After the Potter family opened the Cranberry Expo Ltd. museum and gift shop on their cranberry marsh in 1989, Ellen displayed about 500 pieces of her cranberry glass in the museum.

“My mom was a teacher and she loved telling people about growing cranberries. When I suggested there should be a place to educate people on cranberries she was all for it. Mom had a building built and told me to fill it up. As a fifth-generation cranberry grower whose ancestors were major contributors to the Wisconsin cranberry industry, I felt the Expo was a tribute to them too,” said Peggy Anderson.

Granddaughter Carrie Betz also displayed some of her grandparents’ collection at her Cranberry Connections gift shop in Wisconsin Dells, which she operated from 2004 to 2012.

“Grandma had passed away before I opened my gift shop, but Grandpa allowed me to display some of the more rare and unique pieces in my store. Our visitors were intrigued by the variety and the beauty of the cranberry glass that has been made over the past 200 years,” Betz said.