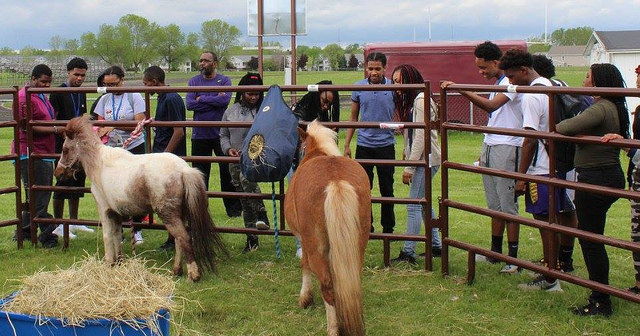 Each freshman is required to take a year-long Introduction to Agricultural Sciences class and on Showcase day, they filed into the school’s auditorium to hear the afternoon’s kickoff speaker. The state’s top agricultural administrator, Ben Brancel, Secretary of the Department of Agriculture, Trade and Consumer Protection, was there to encourage the freshmen to be part of the state’s agricultural future, either by continuing their education in college or by working directly with the food and beverage industry.

Brancel remarked that these students can participate in a curriculum that no other urban high school in the state offers. After freshman year, students can pursue six different pathways: Animal Science, Horticulture Science, Food Science, Environmental Science, Agribusiness and Culinary Arts.

School Principal Daryl Burns was on hand to lead the freshman and their guests into the gym filled with upperclassmen and the schools’ other ag teachers. The energy was palpable with young men and women showing off plants they had raised in the greenhouses, food made in culinary arts classes and homemade lotions made from goat’s milk. Many of the items were for sale.

An iguana, baby chicks and ducks, parakeets, and chinchillas comprised some of the menagerie in the room but the large animals were outside, including Susan the goat, six lambs, two piglets, two bull calves and several horses.

Some of the animals were brought in for the day by animal science teacher Monica Gahan, but many are residents on the 90-acre campus—one of the reasons why the north-side school is such an ideal setting for its agricultural focus. Some of the animals that live in a large shed at the school will also be showcased by the students at the Wisconsin State Fair later in the summer.

“This is a wonderful opportunity for Vincent students to understand first-hand the challenges and joys of raising and showing animals, something that has traditionally been reserved for only rural kids,” said Molly Jahn, professor of agronomy at the UW-Madison. The school has started a 4-H group as well.

Jahn is credited with infusing resources into Vincent High School though a USDA grant on sustainable agriculture obtained by the University of Wisconsin-Madison. Funding has been provided since 2013 for Gail Kraus, UW-Madison agricultural outreach specialist, who has supported Vincent teachers as they develop the school’s agricultural curriculum and directs a summer internship program.

“The Agricultural Showcase was a great opportunity for the students and staff to show off the rigorous, engaging and dynamic work they have been doing during the past year,” said Kraus.

As the event was winding down, school principal Daryl Burns left to check on what was happening the next day—another showcase of sorts would be taking place. The following day, a busload of newer faculty, staff and administrators from the UW-Madison visited as part of the university’s Wisconsin Idea Seminar, a five-day state-wide tour.

“The seminar shows examples of the important ways that the people of Wisconsin contribute to the success of the university, and in turn, how the university serves the state to enhance lives of Wisconsinites,” said seminar director Catherine Reiland.

The Vincent High School visit proved insightful to the seminar participants. “It was great to hear directly from the students about the bright spots and challenges of the agricultural learning tracks and about their future aspirations,” said Steve Barcus, director of communications for the UW-Madison’s International Division, who was on the trip.

Jahn envisions Vincent as a model for other urban high schools in Wisconsin one day. “The UW-Madison’s relationship with Vincent High School is such a great example of the Wisconsin Idea in action,” said Jahn, who attended both days’ events.