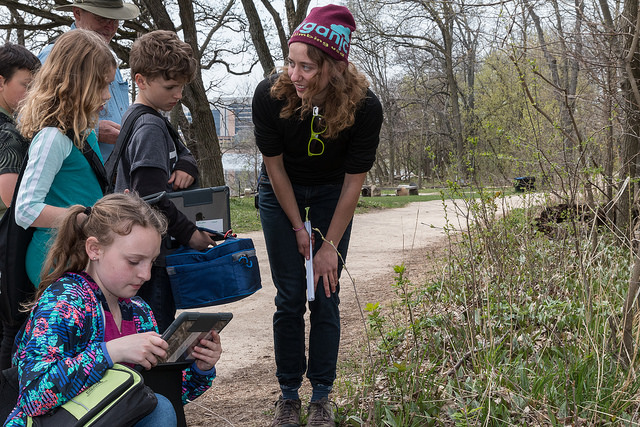 And it worked!  They learned about forest ecology in a fun way!

It didn’t take the predators long to adapt. At first they were too slow and noisy and easy for the prey to spot.  But they quickly wised up. They shed their brightly colored coats and found better hiding spots. And they tried to be quiet, but that was a lot to expect, because things get pretty wild when you take a bunch of 10- and 11-year-olds into the woods and tell them to act like animals.

Encouraging kids to behave like animals is a great way to help them understand animal behavior, says Megs Seeley, a UW-Madison graduating senior in forest science and botany. It’s one of the strategies that she and fellow members of the UW Forestry Club used over the past school year to teach Verona 4th- and 5th-graders some principles of forest ecology.

In this free-form version of hide-and-seek, the youngsters were allowed to change the rules of the game as they thought up new ways to tilt the advantage in favor of either the hunters or hunted.

“At first the kids who were acting as prey spotted the predators right away, because the kids were wearing bright jackets,” Seeley recalls. “So the predators took off their jackets to blend in. They came up with all these really creative ideas—like about how the prey could move, or how the predators could move. Afterwards we talked about it. We were able to incorporate all these things we wanted to teach into the game.”

The predator vs. prey game was exactly the kind of high-energy, fresh-air learning that teachers Lee Lohr and Heidi Konop had in mind when they enlisted the forestry students to lead some field trips for their classes at New Century School, an environmentally themed public charter school in the Verona school district.

“The kids loved it,” says Lohr. “When you’re 10 or 11, being in the woods playing games is a blast. At the same time, it was reinforcing concepts that we had introduced in class. We’ve covered those things, but it really helps if you can review the material in a setting that’s a little more relaxed and a little more real.”

The UW and elementary students rendezvoused at Picnic Point (part of the UW-Madison’s 300-acre Lakeshore Nature Preserve) four times from fall through spring so that they could talk about how the woods change across seasons. The 4th- and 5th-graders learned about habitats and food sources and how to use a forester’s measuring stick to estimate how much timber a group of trees will yield. They learned how to identify common trees and plants using some descriptors you won’t find in a field guide: e.g. black cherry bark resembles burnt potato chips and Dutchman’s breeches look like underpants.

They also learned that while university students know an awful lot, sometimes they get stumped and have to puzzle things out just like 4th and 5th graders do.

“One time the student leading our group wasn’t sure what kind of tree we were looking at,” Lohr recalls. “He had to stop and consult with another guy, and the two of them kind of forgot about us for a moment as their own curiosity kicked in and they went through the whole process of elimination. That was a great lesson for our students. They saw that even experts still have to ask questions and figure some things out.”

The UW students also learned a lot by spending time in the woods with their young protégées—in particular, that the best way to engage students is to see what they’re excited about and take it from there.

“One day we noticed that every time we turned around, the kids were down by the water,” Seeley says. “So we said, ‘Okay, let’s talk about the water.’ Someone found the wing of a gull that some animal had eaten. They thought it was really cool, so we talked about that—what might have eaten it, and what the gull could have done differently to survive. They kept bringing us all these things and asking ‘What is it?’”

“I believe the biggest part of learning is being excited about what you’re learning,” she says. “Listening to their creativity and ingenuity makes you realize that you can’t lose that type of excitement and way of thinking about things. Otherwise you’ll stop coming up with new ideas.”