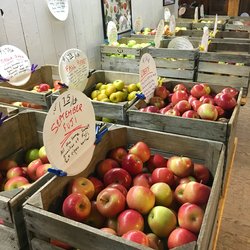 Wisconsin’s apple picking season began at the end of August and will carry us through October. With about 300 orchards in the state, the choices are many. With 7,500 varieties of apples in the world, there is one for most tastes. 200 varieties are grown at Brightonwoods Orchard out of Bloomington, where William Stone, his wife, and sister-in-law make their livelihood.

Listen to Bobbi Jo’s interview below.

He describes Wisconsin’s apple crop as more varied than one might expect. Differences in terrain just in our state, be it hills or locations by water, affect how apples are grown and how many. The coldness of Wisconsin weather, no matter location, is something farmers have to watch out for, he says. This year, South Eastern Wisconsin faced too low of temperatures in May, and 20-25% of apples on the lower orchard got frost rings. The rings do not harm the fruit but are less aesthetically pleasing. In spite of sometimes cold weather, Stone says Wisconsin still offers an overall excellent environment for apples, comparable to leaders in New York Michigan, Oregon, and Washington, though Wisconsin itself has a small industry. Wisconsin is expected to have an average harvest this year.

The largest producer of apples is actually China, taking up 50% of the market according to Stone. The US only grows 8%., and Wisconsin 1%. Bloom is Wisconsin takes place around the beginning middle of May, and depending on bloom can ripen as early as 75 days. Because of the encroaching winter, Wisconsin is only able to grow certain varieties, excluding those such as Pacific Beauty and Pink Lady.

As the market grows to feed the growing world population, taste in apples has changed. Stone says the image of a red apple comes from the market preference for a color that does not show bruises as easily. As such, customers grew to prefer this. With the exception of perhaps the older generation, soft apples have largely been done away with as firmer fruits became mainstream. Stone says of the 7,500 varieties of apples, it can be relatively easy to know which ones people will buy.