Home » Blog » Uncategorized » The Shape of Your Butter 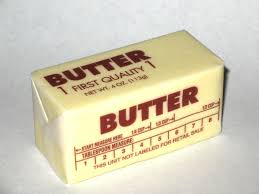 Butter has traditionally been made into small, rectangular blocks by means of a pair of wooden butter paddles.

In the United States, butter is usually produced in 4-ounce sticks, wrapped in waxed or foiled paper and sold four to a one-pound carton. This practice is believed to have originated in 1907, when Swift and Company began packaging butter in this manner for mass distribution.

Due to historical differences in butter printers (machines that cut and package butter), these sticks are commonly produced in two different shapes:

Both sticks contain the same amount of butter, although most butter dishes are designed for Elgin-style butter sticks.

Outside of the United States, butter is packaged and sold by weight only, not by volume (fluid measure) nor by unit (stick), but the package shape remains approximately the same. The wrapper is usually a foil and waxed-paper laminate (the waxed paper is now a siliconised substitute, but is still referred to in some places as parchment, from the wrapping used in past centuries; and the term ‘parchment-wrapped’ is still employed where the paper alone is used, without the foil laminate).

In the UK and Ireland, and in some other regions historically accustomed to using British measures, this was traditionally ½lb and 1 lb packs; since metrication, pack sizes have changed to similar metric sizes such as 250g and 500g. In cooking (recipes), butter is specified and measured by weight only (grams or ounces); although melted butter could be measured by fluid measure (centiliters or fluid ounces), this is rare.

In the remainder of the metricated world, butter is packed and sold in 250g and 500g packs (roughly equivalent to the ½lb and 1 lb measures) and measured for cooking in grams or kilograms.