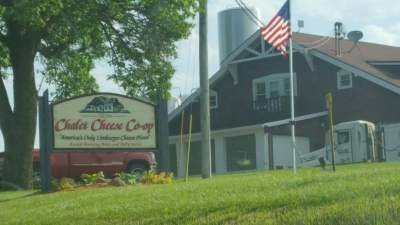 Able to call itself the only place that makes Limburger cheese in the United States, the Chalet Cheese Co-op in Monroe, WI has its claim to fame. However, they make plenty more than that. Through Myron Olson, the only master cheesemaker certified in Limburger, the tradition of Limburger has been kept alive since its foundation in 1885. The American origin of the "stinky cheese" began with just five dairy farmers in a small one-room factory. It has since expanded to include multiple rooms, but the factory keeps the tradition of open vats. Although no longer jointed, the current plant comes from a joint venture with Kraft Foods.
The factory has 103 awards and counting, including a first place title in the WCMA U.S. Cheese Championship Contest. Their recipe of German Brick with a Limburger smear not only speaks of rennovation, but it gathered its own awards in WCMA contests.
Chalet Cheese Co-op creates its award-winning cheese from the milk of 19 farms. In the mix of farms are young farmers, three with robots and four with milking parlors, so new technology and ideas are keeping the future looking bright. The milk supply is a unique blend of 75% Holstein and 25% Brown Swiss. They currently make about 600,000 pounds of Limburger a year, sold to loyal customers.
Limburger is made as a regular cheese, starting as like a feta cheese, befor being taken into a moisture and tempurature controlled cellar. In there, a bacteria is added to it, which grows on the surface and is inoculated. The surface starts to get sticky, and then the cheese is wrapped in foil and put in a cooler. In the cooler, the fat and protein are broken down, working from the surface towards the core. It becomes softer, and as Limburger ages, the more barney and smearable it becomes.